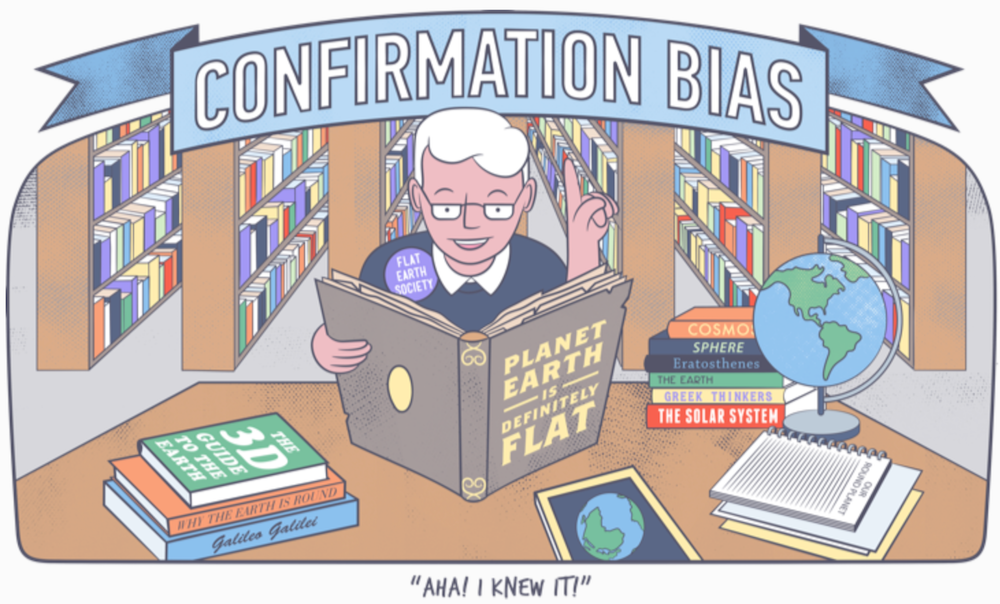 (This cartoon and nine more similar ones are here).

Our human reasoning and decision-making processes are inherently flawed. Faced with so many decisions to be made every day, we take short-cuts (called heuristics) that help us make “pretty good” decisions with little effort. These “pretty good” decisions are not always right and often compromise and exchange our best decision for one that is just good enough. These heuristics carry with them assumptions which may not be relevant to the individual decision at hand, and if these assumptions are not accurate for the current problem, then a mistake may be made. We call these assumptions “cognitive biases.” Thus,

When a heuristic fails, it is referred to as a cognitive bias. Cognitive biases, or predispositions to think in a way that leads to failures in judgment, can also be caused by affect and motivation. Prolonged learning in a regular and predictable environment increases the successfulness of heuristics, whereas uncertain and unpredictable environments are a chief cause of heuristic failure (Improving Diagnosis in Healthcare).

More than 40 cognitive biases have been described which specifically affect our reasoning processes in medicine. These biases are more likely to occur with quicker decisions than with slower decisions. The term Dual Process Theory has been used to describe these two distinct ways we make decision. Daniel Kahneman refers to these two processes as System 1 and System 2 thinking.

System 1 thinking is intuitive and largely unintentional; it makes heavy use of heuristics. It is quick and reasoning occurs unconsciously. It is effortless and automatic. It is profoundly influenced by our past experiences, emotions, and memories.

System 2 thinking, on the other hand, is slower and more analytic. System 2 reasoning is conscious and operates with effort and control. It is intentional and rational. It is more influenced by facts, logic, and evidence. System 2 thinking takes work and time, and therefore is too slow to make most of the decisions we need to make in any given day.

A System 1 decision about lunch might be to get a double bacon cheeseburger and a peanut butter milkshake (with onion rings, of course). That was literally the first meal that popped into my head as I started typing, and each of those items resonates with emotional centers in my brain that recall pleasant experiences and pleasant memories. But not everything that resonates is reasonable.

As the System 2 part of my brain takes over, I realize several things: I am overweight and diabetic (certainly won’t help either of those issues); I have to work this afternoon (if I eat that I’ll probably need a nap); etc. You get the idea. My System 2 lunch might be kale with a side of Brussel sprouts. Oh well.

These two ways of thinking actually utilize different parts of our brains; they are distinctly different processes. Because System 1 thinking is so intuitive and so affected by our past experiences, we tend to make most cognitive errors with this type of thought. Failures can occur with System 2 thinking to be sure, and not just due to cognitive biases but also due to logical fallacies, or just bad data; but, overall, System 2 decisions are invariably more correct than System 1 decisions.

We certainly don’t need to overthink every decision. We don’t have enough time to make System 2 decisions about everything that comes our way. Yet, the more we make good System 2 decisions initially, the better our System 1 decisions will become. In other words, we need good heuristics or algorithms, deeply rooted in System 2 cognition, to make the best of our System 1 thoughts. Thus the howardism:

The mind is like a parachute: it works best when properly packed.

The packing is done slowly and purposefully; the cord is pulled automatically and without thinking. If we thoroughly think about where to eat lunch using System 2 thinking, it will have a positive effect on all of our subsequent decisions about lunch.

How does this relate to medicine? We all have cognitive dispositions that may lead us to error.

First, we need to be aware of how we make decisions and how our brains may play tricks on us; a thorough understanding of different cognitive biases can help with this. Second, we need to develop processes or tools that help to de-bias ourselves and/or prevent us from falling into some of the traps that our cognitive biases have laid for us.

Imagine that you are working in a busy ER. A patient presents who tells the triage nurse that she is having right lower quadrant pain; she says that the pain is just like pain she had 6 months ago when she had an ovarian cyst rupture. The triage nurse tells you (the doctor) that she has put the patient in an exam room and that she has pain like her previous ruptured cyst. You laugh, because you have already seen two other women tonight who had ruptured cysts on CT scans. You tell the nurse to go ahead and order a pelvic ultrasound for suspected ovarian cyst before you see her. The ultrasound is performed and reveals a 3.8 cm right ovarian cyst with some evidence of hemorrhage and some free fluid in the pelvis. You quickly examine and talk to the patient, confirm that her suspicious were correct, and send her home with some non-narcotic pain medicine and ask her to follow-up with her gynecologist in the office.

Several hours later, the patient returns, now complaining of more severe pain and bloating. Frustrated and feeling that the patient is upset that she didn’t get narcotics earlier, you immediately consult the gynecologist on-call for evaluation and management of her ovarian cyst. The gynecologist performs a consult and doesn’t believe that there is any evidence of torsion because there is blood flow to the ovary on ultrasound exam. He recommends reassurance and discharge home.

The next day she returns in shock and is thought to have an acute abdomen. She is taken to the OR and discovered to have mesenteric ischemia. She dies post-operatively.

While this example may feel extreme, the mistakes are real and they happen every day.

When the patient told the nurse that her ovary hurt, the nurse was influenced by this framing effect. The patient suffered from triage cueing because of the workflow of the ER. The physician became anchored to the idea of an ovarian cyst early on. He suffered from base-rate neglect when he overestimated the prevalence of painful ovarian cysts. When he thought about his previous patients that night, he committed the gambler’s fallacy and exhibited an availability bias. When the ER doctor decided to get an ultrasound, he was playing the odds or fell victim to Sutton’s slip. When the ultrasound was ordered for “suspected ovarian cyst,” there was diagnosis momentum that transferred to the interpreting radiologist.

When the ultrasound showed an ovarian cyst, the ER physician was affected by confirmation bias. The ER doctor’s frequent over-diagnosis of ovarian cysts was reinforced by feedback sanction. When he stopped looking for other causes of pain because he discovered an ovarian cyst, he had premature closure. When he felt that the patient’s return to the ER was due to her desire for narcotics, the ER doctor made a fundamental attribution error. When he never considered mesenteric ischemia because she did not complain of bloody stools, he exhibited representativeness restraint. When he consulted a gynecologist to treat her cyst rather than explore other possibilities, he was exploited by the sunk costs bias.

Each of these are examples of cognitive biases that affect our reasoning (see definitions below). But what’s another way this story could have played out?

The patient presents to the ER. The nurse tells the doctor that the patient is in an exam room complaining of right lower quadrant pain (she orders no tests or imaging before the patient is evaluated and she uses language that does not make inappropriate inferences). The doctor makes (in his head) a differential diagnosis for a woman with right lower quadrant pain (he does this before talking to the patient). While talking to the patient and performing an exam, he gathers information that he can use to rule out certain things on his differential (or at least decide that they are low probability) and determines the pretest probability for the various diagnoses on his list (this doesn’t have to be precise – for example, he decides that the chance of acute intermittent porphyria is incredibly low and decides not to pursue the diagnosis, at least at first).

After assessing the patient and refining his differential diagnosis, he decides to order some tests that will help him disprove likely and important diagnoses. He is concerned about her nausea and that her pain seems to be out of proportion to the findings on her abdominal exam. He briefly considered mesenteric ischemia but considers it lower probability because she has no risk factors and she has had no bloody stools (he doesn’t exclude it however, because he also realizes that only 16% of patients with mesenteric ischemia present with bloody stools). Her WBC is elevated. He does decide to order a CT scan because he is concerned about appendicitis.

When the CT is not consistent with appendicitis or mesenteric ischemia, he decides to attribute her pain to the ovarian cyst and discharges her home. When the patient returns later with worsened pain, he first reevaluates her carefully and starts out with the assumption that he has likely misdiagnosed her. This time, he notes an absence of bowel sounds, bloating, and increased abdominal pain on exam. He again considers mesenteric ischemia, even though the previous CT scan found no evidence of it, realizing that the negative predictive value of a CT scan for mesenteric ischemia in the absence of a small bowel obstruction is only 95% – meaning that 1 in 20 cases are missed. This time, he consults a general surgeon, who agrees that a more definitive test needs to be performed and a mesenteric angiogram reveals mesenteric ischemia. She is treated with decompression and heparin and makes a full recovery.

These two examples represent an extreme of very poor care to very excellent care. Note that even when excellent care occurred, the rare diagnosis was still initially missed. But the latter physician was not nearly as burdened by cognitive biases as the former physician and the patient is the one who benefits. The latter physician definitely used a lot of System 1 thinking, at least initially, but when it mattered, he slowed down and used System 2 thinking. He also had a thorough understanding of the statistical performance of the tests he ordered and he considered the pre-test and post-test probabilities of the diseases on his differential diagnosis. He is comfortable with uncertainty and he doesn’t think of tests in a binary (positive or negative) sense, but rather as increasing or decreasing the likelihood of the conditions he’s interested in. He used the hypothetico-deductive method of clinical diagnosis, which is rooted in Bayesian inference.

I’m sure you can think of many other examples for these biases, and there are many other biases that have been described apart from those on the list. There is an emerging scientific literature which is examining the effects of bias on diagnostic and therapeutic outcomes and on medical error. The 2015 Institute of Medicine Report, Improving Diagnosis in Healthcare, is a good place to start exploring some of the implications of bias in the diagnostic process.

Next we will explore some strategies to mitigate our bias.