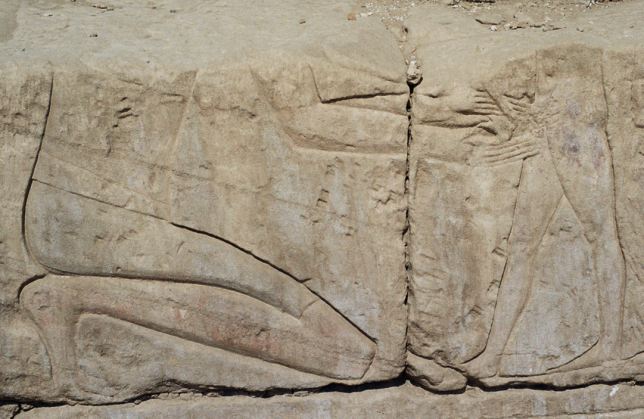 Egyptian depiction of circumcision from 1360 BC

I get this question a lot and have avoided writing about it for some time. But, alas, we mustn’t be afraid of a little controversy on howardisms. So here goes:

Should we electively circumcise newborn boys?

All decisions in medicine should be made through an ethical framework that balances beneficence, nonmaleficence, autonomy, and justice – our basic ethical principles. These are things I think about daily, but I recognize that too often they are concepts lost on the medical community at large and most of our patients. The more controversial the intervention (something like circumcision or vaccination), the more important it is to seriously consider each ethical principle when making a decision. To consider the ethical principles first requires a judicious and thoughtful risk-benefit analysis, so let’s start with that.

It’s hard to compare in an objective way any claims of sexual satisfaction between uncircumcised men and circumcised men and most of the literature that attempts to do so is methodologically flawed and hugely biased. Further, the question regards infant circumcision, not adult circumcision. It would not be surprising if an adult man underwent an embarrassing and painful experience like circumcision and then subsequently suffered some degree of sexual dysfunction or difference in pleasure; but a man circumcised in infancy doesn’t have anything to compare to and hasn’t suffered any post-pubertal embarrassment because of the procedure. Nevertheless, from the data that are available, there is no quality evidence that sexual function or satisfaction is any different in men who were circumcised as infants versus those who were not.

HIV and other STIs

Circumcision is clearly associated with a lower risk of HIV transmission (reducing risk of transmission by more than half) and some other STIs. In fact, circumcision is so effective at reducing the risk of HIV transmission that many African countries have began widespread programs to circumcise men to reduce rates of HIV (it has been recommended by WHO and UNAIDS). About 15 million male circumcisions have been performed in Africa in the last decade and Africa is the most circumcised continent. This benefit is often ignored by American parents who argue that their American boys are at a lower risk of HIV to begin with and that they can be taught safe sexual practices. These points are, of course, true. We certainly don’t mean to rely on circumcision as a way of curtailing the rates of HIV or STIs in the United States. Still, over 1 million Americans have HIV and 1 in 7 don’t know it; nearly 2 million people in the US get STIs each year and the rates are rising. Decreasing the risk of these infections in men also benefits women.

As one might expect, circumcision is highly protective against invasive penile cancer. Of course, penile cancer is rare, with a yearly incidence of only about 1 per 100,000 men, and it occurs almost exclusively in uncircumcised men. But without circumcision, the roughly 2000 cases of penile cancer each year in the US might grow to over 10,000.

Approximately 10% of uncircumcised boys and adult men will experience phimosis in their lifetimes, and many of these men will need circumcision as a cure. Paraphimosis can lead to gangrene and is usually a medical emergency; the incidence of this is about 1% among uncircumcised men. Due to paraphimosis or phimosis, a significant number of adolescent boys or adult aged males will undergo emergent or planned circumcision. The exact number is unknown but is likely around 6% of uncircumcised men. Adult circumcision carries significantly greater risks than newborn circumcision of pain (especially with erections), bleeding, and negative sexual/psychological sequelae.

Removal of the foreskin also reduces the risk of inflammatory conditions of the penis such as balanitis and lichen sclerosis that is often associated with phimosis. The risks of syphilis, trichomoniasis, and chancroid are also reduced in circumcised men and their partners. There is also evidence of reduced risk of prostate cancer.

What about the risks?

These potential benefits must be weighed against potential risks.

All of these risks are very rare and, for the most part, are easily treated.

An excellent summary of the risks and benefits can be found in this article, published last year. Here are the results of their literature review (click on the image for full size): The authors conclude that 80% of uncircumcised males will suffer some minor or major issue in their lifetimes related to the foreskin. At the same time, about 0.4% of infants will suffer a complication of circumcision, with the most common complication being minor bleeding. The risk of more significant complications is 1 in 3000. These assumptions create a risk to benefit ratio of 1:200, meaning that one harm occurs for every 200 benefits.

Let’s now consider each ethical principle and apply them in this context.

The consideration of “doing no harm” must always be evaluated in the context of how much good an intervention provides; but understanding potential harms is very important to make a fair comparison. The most common risk associated with the procedure (bleeding) is easily managed and almost always self-limited. Other risks, including excessive skin removal, are exceedingly rare and don’t usually result in permanent loss of function. There are certainly catastrophic injuries that have resulted from the procedure including loss of penile tissue, but these are so rare that they are fairly measured against equally rare outcomes like invasive penile cancers in uncircumcised men that result in loss of penile tissue or the entire penis. In short, the benefits seem to consistently outweigh the risks, particularly in higher risk populations (like men in Africa). But even in the US, minor benefits significantly outweigh minor risks and major benefits significantly outweigh major risks.

Many parents who would oppose circumcision on moral grounds would think nothing of having the ears of their infant daughter pierced (a procedure which carries no measurable benefit but significant risks). Parents also don’t worry about infant consent when considering a frenotomy for a tongue-tied newborn (even though the procedure is significantly over-utilized and provides most children with only minor benefits at best).

The autonomy in this case resides not with the child but with the parents, who make decisions every day on behalf of their child. Parents must weigh the risks and benefits of everything they do for their child and make an informed, value-based decision.

This ethical concept relates to the equitable distribution of scarce healthcare resources (I have read a recent discussion about this subject written by an activist who seems to not understand what medical justice is). Circumcision is a relatively inexpensive procedure. To understand whether it is a just procedure, we must evaluate whether there is a return on investment. Are we saving scarce healthcare dollars by performing these procedures? Could we better spend the money elsewhere?

This question is difficult to answer directly as no study has addressed the issue thoroughly. We can, however, consider some known costs. To treat a person with HIV/AIDS diagnosed in his 20s likely will cost in excess of $3M in today’s dollars. A circumcision costs about $250. That means prevention of one case of HIV/AIDS will pay for about 12,000 circumcisions. In Africa, this is a no-brainer. In the US, there are about 40,000 new cases of HIV each year. About 75% of the men are circumcised, meaning that among that group of cases (about 30,000), circumcision may prevent as many as 45,000 cases per year (assuming a 60% reduction in transmission).

Let’s say conservatively that the reduction in new cases of HIV due to circumcision is only 30,000. If 75% of males born in the US were circumcised each year, then there would be roughly 1.5M circumcisions per year. But since each case of HIV/AIDS prevented pays for 12,000 circumcisions, then preventing 30,000 cases per year would pay for 360M circumcisions! In other words, even if routine neonatal circumcision in the US prevented only 125 cases of HIV/AIDS each year, the practice would be cost-saving. This, of course, doesn’t even begin to consider all of the other potential cost savings from STIs, UTIs, cervical and penile cancers, etc.

Thus, even if the studies are wildly incorrect (off by as much as a factor of 250), neonatal circumcision is still a cost-effective measure and therefore ethically just.

What I have presented are objective data as best we currently understand them. But that doesn’t mean that every male should be circumcised!

All I have done is demonstrate that circumcision is a cost effective, ethical, scientifically-supported procedure whose benefits significantly outweigh its risks. But most people don’t make decisions based on this framework. It’s okay if you make another decision, but I think it’s important that a decision against circumcision not be dressed up as a scientific or ethical one.

If you want to be purely analytical about risk-benefit ratios, then you should also never jump out of a plane, go skiing, drive a car, or watch TV. You should never eat a hotdog or eat dessert. But we choose everyday to do things that are far more unhealthy than not getting circumcised. We choose to do things that carry some risk because we get some other benefit out of doing it or at least perceive that we get some benefit from it. People are allowed to make bad decisions (smoking, not exercising, etc.). People are allowed to choose some risk for some reward (eating dessert).

The absolute risks and absolute benefits of circumcision are relatively small and so most people’s choices for or against it just don’t matter in the big scheme of things. Vaccines are a far more important intervention for children than circumcision.

But, from a population health perspective, boys should probably get circumcised, and that’s basically the recommendation of leading pediatric and public health organizations in the US and around the world (most of which say that the benefits clearly outweighs the risks but the decision should be left to the fully-informed parent).

Interestingly, the movement in the US against circumcision about 20 years ago coincided with studies which were finally showing benefit of the procedure. It had been largely assumed 20 years ago that circumcision was just an unscientific cultural custom of Anglophone countries. But since then we have learned that the opposite is true and we are now promoting circumcision in Africa and other countries where the benefits are tremendous.

And now a personal opinion: it has always been a paradox for me why the “natural birth” community tends to reject circumcision. One of the assumptions of the natural birth community is that the cultural and inherited practices of thousands of years of women birthing should inform how we give birth today; that our culture has preserved insights into birth, hard-learned through trial and error, that still have meaning for us today. I don’t fundamentally disagree with this premise.

Yet, circumcision represents the best known example of that idea: the practice has been culturally conserved over thousands of years in various societies around the world and, as it turns out, it reduces the risk of cancer, infections, and death – yet many today want to abandon it. I always have imagined communities of prehistoric men who were tired of dealing with the difficulties of adult circumcision, which would have been much more common at the time due to poor hygienic practices and untreated infections. Perhaps 1 in 4 adult men in ancient Egypt had to have his foreskin removed with relatively blunt stones and no anesthesia. Their society likely esteemed neonatal circumcision as a great breakthrough that saved many adult men significant trauma and premature deaths. In fact, it is the oldest continually practiced health intervention in human history, dating back some 4000 years at least. Unlike many other popularly-practiced cultural medical customs, it has clear scientific evidence of benefit.

Circumcision is as valid a medical practice as any other modern medical procedure.