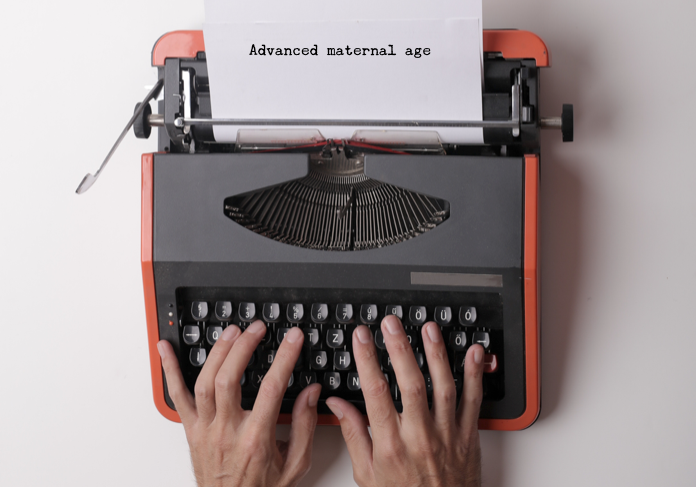 Few phrases are as misunderstood as “advanced maternal age.” Both doctors and patients frequently misuse and abuse this term. For most people, it implies that at the age of 35 or greater, the ability to have a child becomes dangerous and risky – and women who dare such a feat will need special care and special “high-risk” interventions.

But what does it actually mean? To understand, we need to explore the history of the concept and the phrase. As we will find out, it has been a term searching for a meaning for a long time.

The first article that Pubmed lists with this phrase was written in 1945 by a Harvard neurologist, Herbert Berry:

In his article, he reports that advanced maternal age has most definitively been associated with “mongolian idiocy” and defined advanced maternal age as women over the age of 40. Mongolian idiocy was the term then used for Down syndrome. Down himself had called the children mongoloids and idiot was a term that was once a technical term for people with intellectual delay before it became a pejorative. This term was common until 1961 when a letter was written by several genetic experts to The Lancet recommending that the offensive term be abandoned in exchange for other suggested names, one of which was Down Syndrome.

It wasn’t until 1959 that it was discovered that Down Syndrome was due to a triplication of chromosome 21. This discovery was made by French pediatricians Jérôme Lejeune and Marthe Gautier. This discovery spurred the international community to rebuke the use of the offensive and inaccurate term mongoloid.

The term “advanced maternal age” isn’t used in the literature again until March, 1967 in an article by Sydney Kane called Advancing age and the primigravida. He relates that the more common term was “elderly primipara” or “elderly primigravida” or, if appropriate, “multipara.” Sagely, he comments,

…the term “elderly primipara” is used so glibly by most obstetricians and members of obstetric housestaffs as to imply specific academic knowledge of or personal exposure to the subject. The truth of the matter is that neither knowledge nor exposure is adequately available. …What literature is available almost routinely refers to the age of 35 as being the time of an abrupt change in obstetric risk. It was thought that careful investigation of a large group of patients might well support or disprove the significance of the mystical number “35.”

The article analyzes data from a large electronic database of births to draw conclusions about pregnancy over age 35. His conclusion:

The concept of the arbitrary age (35 years) at which maternal risk increases should be abandoned as a myth, and the more logical concept of a sliding scale of difficulty should replace it.

In other words, each year a woman ages, pregnancy risks go up slightly but there is no vast cliff waiting for her at age 35. That makes sense. So what happened?

Amniocentesis. Within a decade of the discovery that Down Syndrome was related to three copies of chromosome 21, the role of cytogenetic screening by amniocentesis antenatally became established. By 1973, the ability to do chromosomal analysis for Down Syndrome and other chromosomal abnormalities was well demonstrated. Also that year, Roe vs. Wade made abortion legal throughout the United States so the antenatal detection of chromosomal abnormalities took off since women could now choose to abort the pregnancy (abortion was and is the only intervention available).

By 1974, obstetricians were looking to classify women into certain risk categories that would require amniocentesis. My former colleague, Jack Rary, then at Johns Hopkins, wrote that year that a woman with a history of a Down Syndrome child or a woman of “advanced maternal age” were the two leading indications for amniocentesis.

The use of the term “advanced maternal age” explodes in the literature after that year.

Here is the chance of having a child with Down Syndrome by age and by trimsester:

I tend to quote these numbers as “You have a 1 in X chance of having a child with Down Syndrome.” Here is the same data organized in that way:

The other thing to notice about the risk of Down Syndrome from the previous graphs is that the risk of having a child with Down Syndrome in the second trimester is about 1 in 270 at age 35. As the 1970s progressed, doctors, now armed with cytogenetics and amniocentesis, were looking for the right candidates to get the test. The idea that age 35 was important was already culturally (but not scientifically) engrained. So how could the idea of offering all women at age 35 or greater an amniocentesis find a scientific footing?

The emphasis from the beginning was about determining pregnancies to be aborted, not that needed special attention or extra surveillance – a fact that I think is sometimes lost today.

The incidence of birth defects increases with maternal age. Recent advances in fetal diagnosis, coupled with elective abortion, offer the older pregnant woman an opportunity to reduce this risk.

In fact, by the 1980s, studies were bemoaning the fact that not enough women over age 35 were being sent for amniocentesis and therefore obstetricians simply weren’t doing enough to reduce the risk of birth defects in older women.

But this argument was fatally flawed from the beginning. First, it assumes that all women who carry a child with Down Syndrome would want to abort it (the vast majority do not, at least where I practice). Second, if a pregnancy is lost due to the genetic amniocentesis, there is only a 1 in 270 chance (at age 35) that that fetus would have Down Syndrome; in other words, almost all of the accidental pregnancy losses are of chromosomally normal children. Third, the fetal loss rate for genetic amniocentesis is not now and never was 1 in 270. The 0.3% loss rate in the JAMA article above was not even statistically significant. Newer studies indicate a loss rate of perhaps 1/1400-1/1600. So 1/270 never meant anything and age 35 was never special.

As noninvasive screening for Down Syndrome became available, nothing changed. Blood tests were soon offered to women to stratify their risk for having a child with Down Syndrome: maternal serum alpha-fetoprotein, hCG, unconjugated estriol, and, eventually, inhibin. Each time a new non-invasive test was developed, it was set to be “positive” whenever the risk of Down Syndrome was greater than 1 in 270. Of course, a positive test could mean that there is a 269/270 chance that the fetus doesn’t have Down Syndrome, but this line in the sand was based on the myth of age 35. This trend continued with first trimester combined and integrated tests as well. Only recently, with the advent of cell-free DNA tests, has the idea of 1 in 270 been pushed to the side.

Still, the myth of age 35 persists.

One last point about the noninvasive tests for Down Syndrome: the push to screen women for Down Syndrome has been such a major part of Obstetrics for the last forty years that most women today aren’t counseled about it all. They often aren’t told that the only meaningful intervention is termination and they often are not asked if that would be their wish. Worse, when their tests come back normal, women feel like the all-clear has been given to the pregnancy, as if Down Syndrome (and trisomies 13 and 18) are the only fetal abnormalities. Thus, most tests are done on patients who are not fully-informed and most patients misinterpret the results.

So, apart from the increasing risk of chromosomal abnormalities, what else is special about age 35?

Well, it is more difficult to get pregnant the older you get and the miscarriage rate definitely increases (both related to the old eggs problem).

The graph below shows the risk of losing a pregnancy due to miscarriage, ectopic pregnancy, and fetal demise (all of which increase with age):

And how about getting pregnant in the first place? Fecundability is the probability that you can become pregnant within in any given menstrual cycle. Here is a graph showing the chance for women to get pregnant in any given month by age:

So, as a woman ages, it takes longer to get pregnant, it is more likely that pregnancy won’t occur at all without expensive fertility treatments, miscarriages become more common, and the rates of chromosomal problems increase. But all of these are continuous changes with no dramatic cliff at age 35. Also, the risk of twins increases as a woman ages as her brain pumps out more follicle stimulating hormone to stimulate ovulation.

But what if you are already pregnant and you are over age 35? Are you high-risk? Not really. It’s actually more dangerous from a pregnancy perspective to be unmarried or for it to be your first pregnancy than it is to be older, even to be over age 40. Recall this from a previous howardism:

So stopping talking about advanced maternal age except as it relates to the risk of miscarriage, chromosomal problems, and fecundability. Beyond that, age is just a number. And don’t get extra antenatal testing just because you are older.