Here are some recent studies about the route of hysterectomy and their implications for vaginal hysterectomy.

A new study this month from Finland looked at cuff dehiscence rates from 13,645 hysterectomies. They found the following rates of vaginal cuff dehiscence:

Of note, there were no differences in patient characteristics that might affect the rate of dehiscence, such as smoking status, weight, hormone status, etc.

Among the 15 women who had a dehiscence in the TLH group, none had a complication and all had the colpotomies made with an energy source: 11 with ultrasonic energy, 3 with bipolar, and 1 with monopolar. Among the non-TLH cases with dehiscence (7 total), all of the colpotomies were made with a cold knife; 4 had no complications, 2 had a hematoma, and 1 had a cuff infection. These differences were statistically significant.

Additionally, Finland has noted an increased rate of vaginal cuff dehiscence since the advent of TLH in that country. Prior studies showed no dehiscence in the country over many years. The 7 dehiscences captured in the non-TLH groups are also increased compared to years before. This may not be due just to bad data collection (in fact, the records are quite complete). Instead, it suggests that the adoption of TLH and its learning curve may have had a negative effect on the skillset of gynecologists for other routes of hysterectomy and a detrimental effect on learners.

The Finnish study and the existing literature contrasts sharply with a recent study from the Italian Society of Gynecologic Endoscopy. This study was published recently in the Gray Journal. The senior author was Ghezzi, the industry-sponsored author of the famous Italian study that claimed that TLH had less pain and a shorter length of stay than VH. I have written about that paper and Ghezzi in particular here. Recall that they kept the VH patients for more than two days! The bottom line there was that the authors were not good vaginal surgeons and they had high complication rates and bad outcomes for the vaginal patients. But the paper was widely distributed by industry as the definitive proof that TLH was superior to VH, even though it constrasted to all available literature. The authors are not vaginal surgeons. Instead, they focus their time on endoscopy. This new study shows that even more. They compared patients who had a laparoscopic hysterectomy with laparoscopic closure versus a laparoscopic hysterectomy with vaginal closure.

Of note, they made the colpotomies laparoscopically with monopolar energy, meaning that they did not employ a cold knife when making the vaginal colpotomies as in a traditional vaginal approach. They also admit that data from their own centers show that vaginal closure was associated with a four-fold lower risk of cuff dehiscence than laparoscopic closure and that this finding was unexpected. Recall that unexpected findings need replication and are usually incorrect.

In any event, the following graph from the paper tells the whole story: 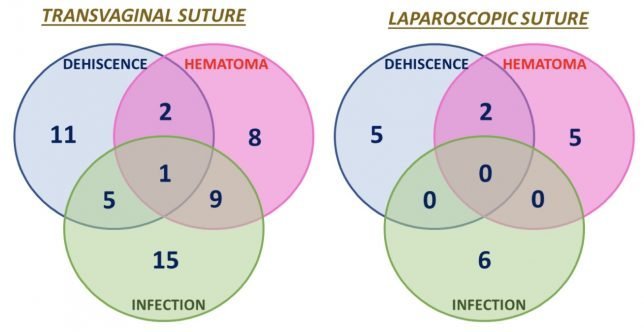 The complication rates are excessively high in the vaginal suturing group: lots of infections and hematomas. These complication rates are many orders of magnitude higher than reported in any other study since the discovery of antibiotics. The message: they are not good vaginal surgeons. The second message may also be that making a vaginal colpotomy with an energy source increases the risk of dehiscence. The authors reported a cuff dehisence rate in the vaginal closure group of 2.7% and a rate of 1% in the laparoscopic suture group. Both of these numbers are higher than anyone should be comfortable with. The rate of cuff dehiscence with traditional vaginal hysterectomy is phenomenally lower, on the order of 1/300 to 1/1000 (I’ve never had one, knock-on-wood).

If anything, this study tells us that people shouldn’t do things that they aren’t good at, let alone publish research studies that influence the practice of others. Any paper that claims shows a 2.7% vaginal cuff dehiscence rate doesn’t apply to any vaginal surgeon I know.