Only in the last decade or so has there been much desire on the part of Obstetricians to develop techniques for preventing lacerations and tears at the time of vaginal delivery. In past years, episiotomy was commonplace for women at risk of tearing, and even after episiotomy was shown to be a harmful practice in the early 1980s, the teachers of obstetrics were largely a generation of Obstetricians who were accustomed to cutting episiotomies; these teachers, therefore, had little to offer their young residents in terms of effective mechanisms of preventing obstetric lacerations and little research was available.

Today, however, a new generation of Obstetricians takes pride in preventing as many lacerations as possible. For almost 15 years I have used the methods described herein at vaginal deliveries. Over thousands of deliveries, I can’t remember the last time I had a third or fourth degree laceration, or any other severe perineal trauma. Most patients don’t tear, and those who do usually have only a minor laceration.

I always hesitate to write about anything for which I can’t cite evidence. I have taught hundreds of students the “Herrell Grip” but haven’t been able to refer to a study that says my method is better than anything else except anecdotal evidence. Until now.

New, national data from Finland has noted that the third and fourth degree laceration rate in that country is only 1.2%, compared to 5.3% in Sweden; the two countries share similar demographics and maternity systems. So, why is there an almost 80% lower risk of severe perineal trauma in Finland? Well, according to many researchers, it’s the “Finnish Grip.” While I clearly prefer the term “Herrell Grip” to the “Finnish Grip,” the principles and methods are strikingly similar. Here is more detailed Swedish article that also calls it the C-Grip.

Here are four tips to help prevent tearing at the time of vaginal delivery. I bet even a Finn might learn something:

1. Understand the physics of childbirth.

In the illustration above, we see in A a baby just before the final stages of labor. In B, note the vector of force (orange arrow) created by maternal pushing efforts. Note that this maternal effort directs maximal force towards the perineal body (P) not the vagina (V). The vagina is angled upwards in comparison to the axis of the pelvis that the baby usually descends through. In C, notice that the perineal body provides some pressure upwards (black arrow) that combines with the maternal effort to produce a new vector of force (pink arrow) that directs the fetal head up (during fetal extension) and out of the vagina.

Perineal lacerations happen because the perineal body isn’t able to provide enough force upwards to sufficiently add to the maternal vector of force. With the Finnish (read: Howard) Grip, we will actively apply the appropriate upward force.

2. Think of the perineum like a linen sheet (that is, don’t cut episiotomies – ever).

The real goal of active management of the perineum is to prevent severe perineal trauma, meaning third and fourth degree lacerations into the rectal sphincter and/or mucosa.

In the GIF above, two grown men pull on the folded sheet as strong as they can and they cannot tear it (I didn’t say they were strong); but, as soon as an episiotomy is cut, the sheet tears all the way down the middle with the same amount of force. The perineum acts the same way. Cutting an episiotomy because she looks like she will tear anyway is essentially just guaranteeing a bad laceration. It has taken decades to get Obstetricians to stop this practice, though far too many continue to cut women.

Once we stopped cutting episiotomies, many Obstetricians tried to put pressure (usually with two fingers) over the perineal body as a method of preventing lacerations. This idea comes from the thought that if we can add a vector of force upwards (as in the picture in Tip #1), then the perineum won’t have to do all the work of assisting the head upwards during extension. But this maneuver (a modified Ritgen maneuver) is no better than “hands-off” posturing at preventing tears. But this makes sense. Imagine in the GIF if someone pushed the sheet in the middle under the cut as hard as they could against the wall; it would have required the same amount of force to tear the sheet.

The problem is that the weakness needs to be reinforced. In the case of an episiotomy the weakness is obvious: the cut. But even without an episiotomy, the perineal raphe is an embryologic weak spot: not only is all the maternal force being aimed at it (which we can redirect by pressing upwards), but the tissue itself is weaker than the rest of the introital tissues. So we have to compensate for this weakness. If we want the sheet to not tear at its weak spot, we must pull the material together to redistribute the forces laterally, away from the weak spot. The Howard Grip (er, Finnish?) does this in addition to forcing extension of the head.

3. Deliberately position the perineum to create the smallest possible diameter around the head.

Before we get to The Grip, let’s think about another truism: we want the smallest diameter of the head possible traveling through the vaginal introitus. Ultimately, the vaginal introitus can only stretch to a certain size before rupture. Let’s review the sizes of the newborn head: 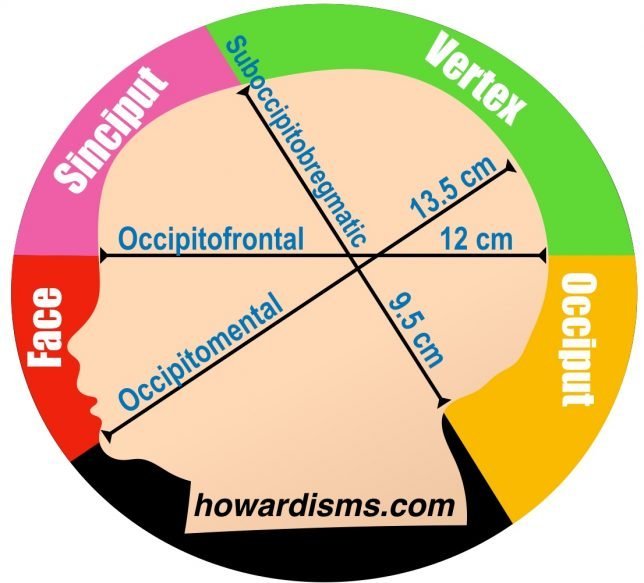 The suboccipitobregmatic diameter is the smallest diameter of the fetal head, measuring an average of 9.5 cm. In most labors, it is this diameter that is presenting through the introitus when the fetal head is crowning. If the occiput is anterior, the base of the fetal skull will rotate underneath the pubic bone as the head extends (de-flexes). 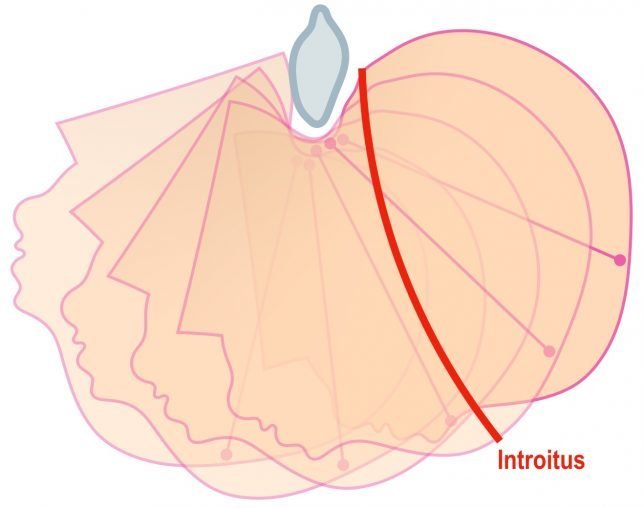 As the occiput and base of the skull clears the anterior introitus during extension, the skin of the vulva tends to grip and stretch outwards, particularly the labia. Gently pushing the labia and vulvar tissues down towards the base of the fetal skull while the head extends outward can reduce anterior and labial lacerations and help to maintain the smallest dimension of the skull as long as possible as it passes through the introitus.

Eventually, though, as the fetal head extends, a diameter larger than 9.5 cm will be presented to the introitus. 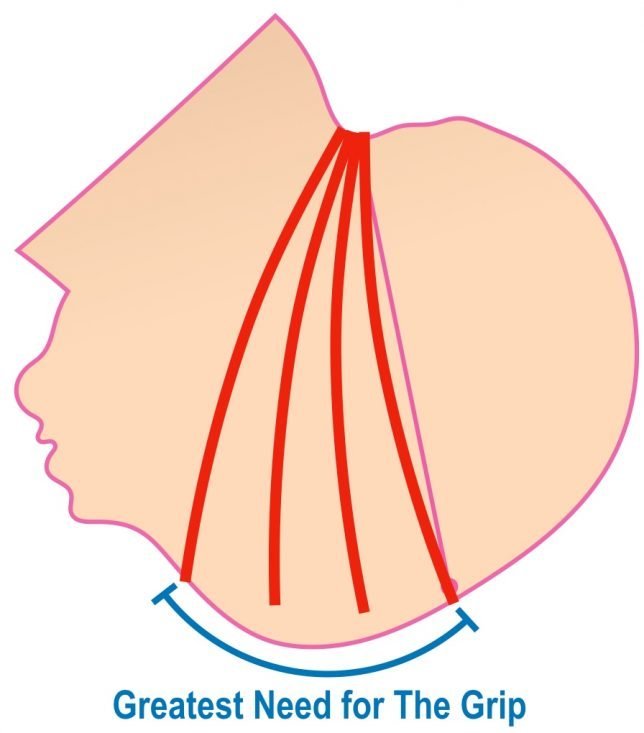 As the sinciput extends outward over the introitus, the introitus needs to dilate greater than 9.5 cm. This is the point when most perineal tears occur, just as the forehead is delivered. Even with the vulvar tissues carefully reduced to the base of the fetal skull, the introitus still needs to expand to its greatest dimension. This is the time to use The Herrell Grip (Finnish? Never heard of it…)

4. Redirect the vectors of force in a beneficial way.

Let’s put together everything we have now learned about prevention of perineal lacerations. 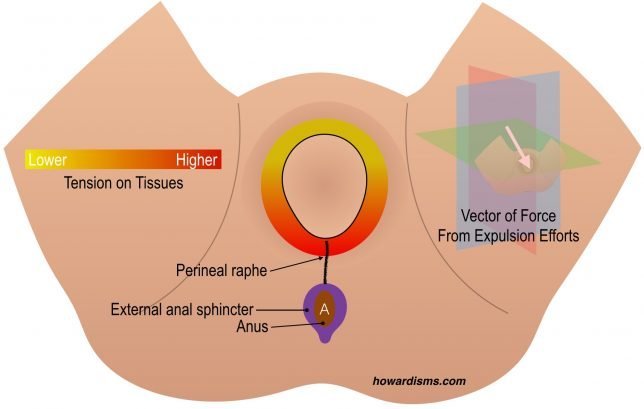 The Grip must overcome both factors that cause perineal trauma:

We need to create a substantial upward vector of force and displace the stretching forces on the introital ring laterally. This is accomplished with The Grip (call it what you want). 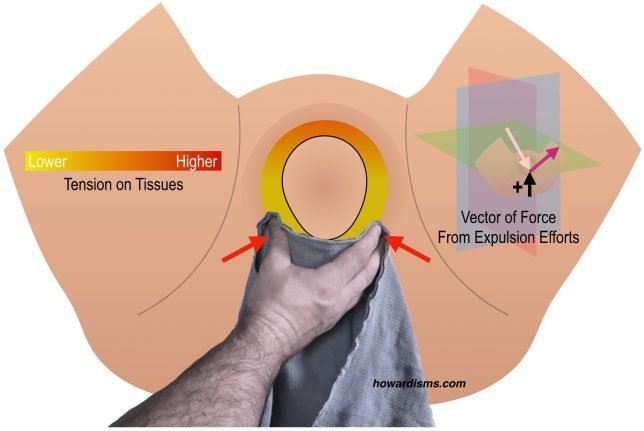 Using a towel (to gain traction), squeeze your hand together as the sinciput delivers. I usually start squeezing just as I see the fetal forehead (as the hair ends) and continue to squeeze until the head is delivered. Place your nondominant hand on the top of the head as it comes out to control the speed of delivery (try to avoid the head popping out all at once). I use my dominant hand for The Grip because it is stronger, and I squeeze with significant force. In fact, one of the lessons to learn is to not squeeze too much because too much pressure can cause anterior lacerations that are painful and difficult to repair (and avoidable).

The squeeze simultaneously causes upward pressure on the head, forcing extension of the fetal head, and also relieves the tension on the perineal raphe by more equally distributing the tension along the introital ring. It should feel like you are literally holding the perineum together as the sinciput delivers.

One difference between The Finnish Grip and The Herrell Grip is that the Finns use the other hand to place pressure on the perineal body to cause extension of the head, whereas I deliver this pressure with The Grip itself. I can imagine that The Finnish Grip evolved in two parts: first, recognizing that forced extension of the fetal head was an important step (as many tried to do with a modified Ritgen maneuver), but then, second, recognizing that this wasn’t enough to solve the tearing sheet problem, they added the grip to pinch the sheet together. So, The Finnish Grip, as described, is overly-complicated. Both of these steps are accomplished simultaneously with The Herrell Grip and the other hand is free to both control the speed of delivery and also push back labia that need to be reduced toward the base of the skull.

You can also wear a glove during the procedure if you like.

With an 80% reduction in the rate of severe perineal trauma, utilization of these maneuvers is essential and should be standard of care.

Also use The Grip with delivery of the shoulders. Many birth attendants get the head delivered without a perineal laceration and then cause one with delivery of the shoulders. When delivering the shoulders, don’t pull down and out, just pull down (not out) until the anterior shoulder clears the pubic bone; then pull upwards and out and use The Grip at the same time. This means that you need to learn to deliver the baby with one hand if you are delivering by yourself, but this is pretty easy.

The average shoulder width of a newborn is 12.5 cm. So, if you pull the shoulders out of the introitus at the same time, you will likely cause a tear. The shoulders must slide out at different times (anterior first) so that a smaller diameter is presented to the introitus.

Also, warm compresses applied to the perineum may reduce the risk of severe trauma by half.