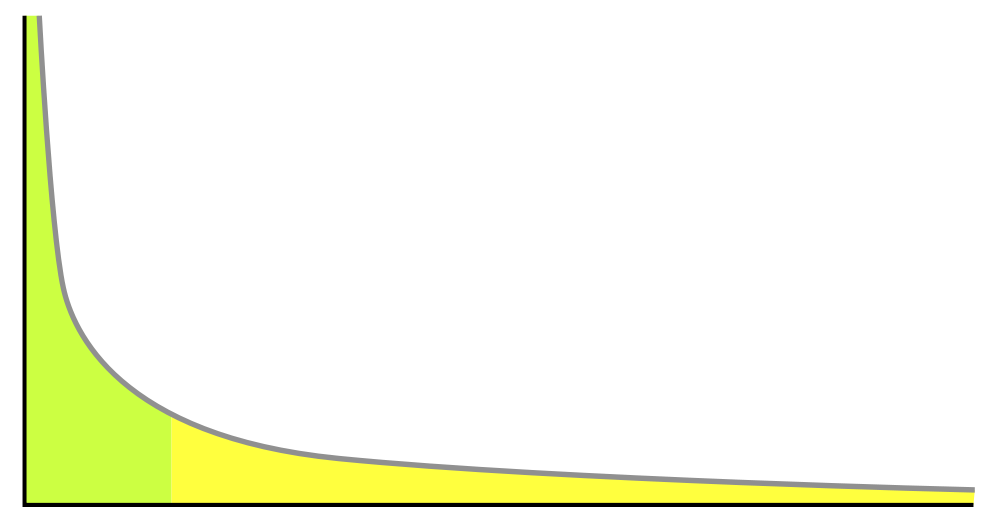 Power laws are mathematical relationships used in statistics to describe how a change in one variable affects another variable. A basic power law is illustrated above. The idea of diminishing returns is a form of a power law. An incredible number of natural and man-made phenomena follow some form of a power law, and mathematicians, statisticians, and economists get very excited by this stuff. Power laws explain how words are distributed in books, how the internet works, and how the power of earthquakes are distributed (and just about everything else).

The Pareto principle is a power law; it states that roughly 80% of certain events come from 20% of causes, or the 80-20 rule. So, for example, 20% of your customers provide 80% of your revenue, or perhaps 80% of your complaints. The principle is observed widely in many fields. 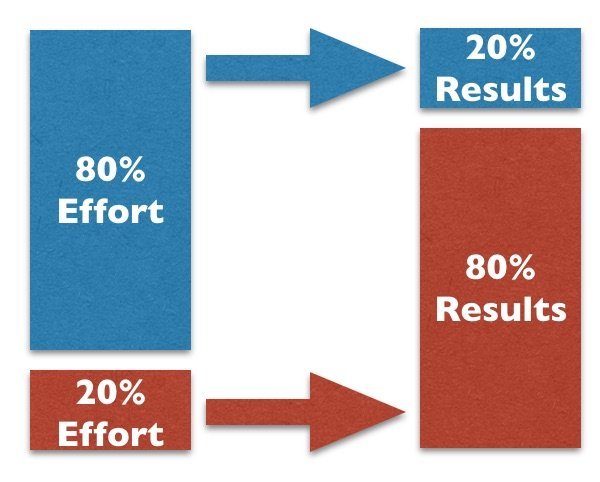 So why do we spend so much time making decisions for a small number of choices? Is it because those decisions are more important, or more consequential? Or is the decision difficult because we lack a clear understanding of the risk/reward involved in the decision or we lack enough data to make the decision appropriately?

One of the oldest howardisms is:

Where there is clarity, there is no decision.

Technically, the Monkees said it first:

In other words, when a person fully understands the pros/cons or the risks/benefits of a decision, when there is clarity about the facts affecting the decision and clarity about the values and desired outcomes that affect the decision, then the decision makes itself. If you have a choice between eating a piece of pizza or jumping off of a 10-story building, it shouldn’t take you long to make that decision and very little anxiety should be experienced. If your choice is between earning 10% interest on your savings or 1%, again, no anxiety should happen and the decision is easy.

Yet, this is the point! The decisions we spend the most time worrying about are those in which there is the least difference in the two outcomes. It’s what the Pareto principle would predict. The more imperceptible the differences in the outcomes, the more time and anxiety we commit. The truth is, though, we would likely be just as happy with either choice in the future; and, if we aren’t, if we make the “wrong” choice, it’s probably because we didn’t know enough to make the correct choice. So just flip a coin.

Therefore, the harder the decision, the more anxiety-provoking the choices, the less time we should commit to the decision. The investment of so much time and energy into the choice isn’t likely to yield equivalent dividends in the future. Its a case of diminished returns. And we probably don’t have enough data to make the decision anyway. The reality is, we don’t know the subtle things that will make us happy or successful in the future.

The same logic applies to decision making in medicine. The data are overwhelming that cigarette smoking is a negative for our health; so don’t smoke. Easy decision (albeit hard to do). At the same time, intelligent people could analyze and debate droves of data over one-layer or two-layer closures of the uterus to prevent future uterine rupture during a trial of labor and not come to a clear answer. Why? Because the difference in the two, if it exists, is so subtle that dozens of studies have yet to be able to consistently and significantly measure it. So stop worrying about it. It doesn’t matter. Pick one and go with it. And don’t dogmatically over-estimate the value of whatever choice you make. A corollary of this is that the harder you have to work to measure a “difference” in two arms of a study, the less important that difference is.

In 2002, Schwartz et al. wrote an article entitled Maximizing versus Satisficing: Happiness is a matter of choice. The article recognizes that humans are not always (or even usually) rational when making choices. I have been describing the thought processes of someone according the Rational Choice Theory, or more specifically, the Expected Utility Hypothesis. But humans are irrational and biased and these logical decision-making models are torn down by cognitive bias.

Schwartz argues that maximizers, or optimizers, seek and only accept the best, whereas satisfiers take the first choice that is good enough, not worrying about the potential for something subtly (or even significantly) better. It would appear that the satisfier may be infinitely more productive. The satisfier accomplishes more tasks and makes more decisions, without investing wasted anxiety and decision-making-time in the diminishing yield of searching for the idealized (but likely not realizable) “best” choice.

Indeed, Schwartz found that “satisfiers” were happier. He argues that excessive choice is actually harmful, at least psychologically, partially because of the anxiety that we expend in making decisions, and then also because of the subsequent regret about decisions, worry about not having made the best choice, perception of lost opportunity or wasted effort, etc. Does going to the grocery store and seeing 35 types of bread to choose from make a person happier than going to the store and seeing only two types of bread? Are the subtle differences between the breads worth the extra time and consternation involved in making the decision about which bread to buy? Sometimes. But mostly not. There is a role for maximizing as well.

The Monkees anticipated Schwartz’s hypothesis when they said that where there is choice there is misery.

Voltaire said, le mieux est l’ennemi du bien, or, as it is commonly expressed in English, “the enemy of good is perfect.” This is definitely the position of a satisfier. If it’s good enough, stop and move on. Don’t screw it up by trying to make it better. Or don’t ever finish the task to begin with because it was never quite good enough. This is good advice for a procrastinating perfectionist. So is this. And the Pareto principle explains why procrastinating perfectionists are not usually that productive.

Yet, satisfiers are also unlikely to ever achieve the highest levels of excellence. This is the origin of another howardism, the anti-Voltaire,

The enemy of perfect is good.

If your goal is excellence, then the tendency to maximize will be your friend. It requires more work and more time and, overall, you will be less productive; but, what you do produce will be better.

It’s the difference between a Timex and Rolex. The Pareto principle explains this as well. The Timex is for the satisfier. The Rolex is for the maximizers. But do you need a Rolex to tell the time? No. So the secret is to understand what your goals are with a task and use the appropriate attitudes and investment. There’s a need for both Timex and Rolex, for both Bob Ross and Rembrandt (no offense, Bob).

The 80-20 rule can direct us: it seems logical that we should spend about 80% of our time as satisfiers and about 20% as maximizers. But what we shouldn’t do is spend a great deal of time and anxiety making inconsequential decisions.