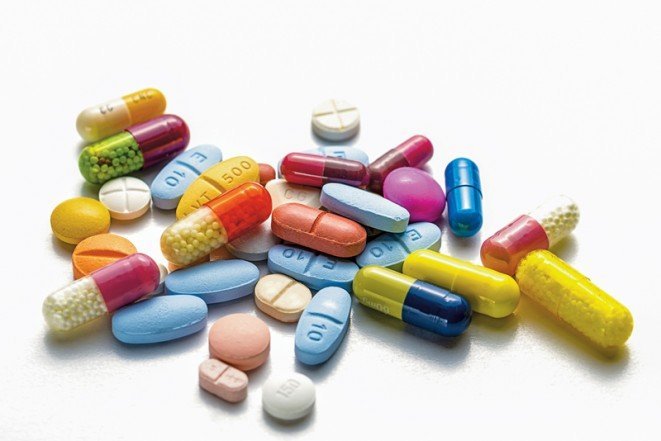 Once the diagnosis is made correctly, the treatments begin. Selection of prescription drugs is one of the important (and costly) things that physicians do. How do we decide which drugs to use? Or, a better question, How should we decide?

First, let’s consider a patient who represents an almost typical case these days: a diabetic who has neuropathy, hypertension, hyperlipidemia, GERD, hypothyroidism, bipolar depression, and an overactive bladder. Even if this might not represent the problem list of your typical patient, it likely represents the problem list of any two patients (the average American between ages 19 and 64 takes 12 prescription drugs per years – many of which are unnecessary).

For each issue on the problem list, let’s select two common treatments. Doctor A tries to use lower cost drugs and generics when available. Doctor B favors newer drugs and believes that he is providing world-class medicine (at least that’s what the drug reps keep telling him). Let’s see what it costs Doctor A and Doctor B to treat this patient each year. Also, we’ll see what the ten year cost of treatment is and then magnify that times 500 patients (to represent a typical treatment panel of patients that a primary care doctor might have). 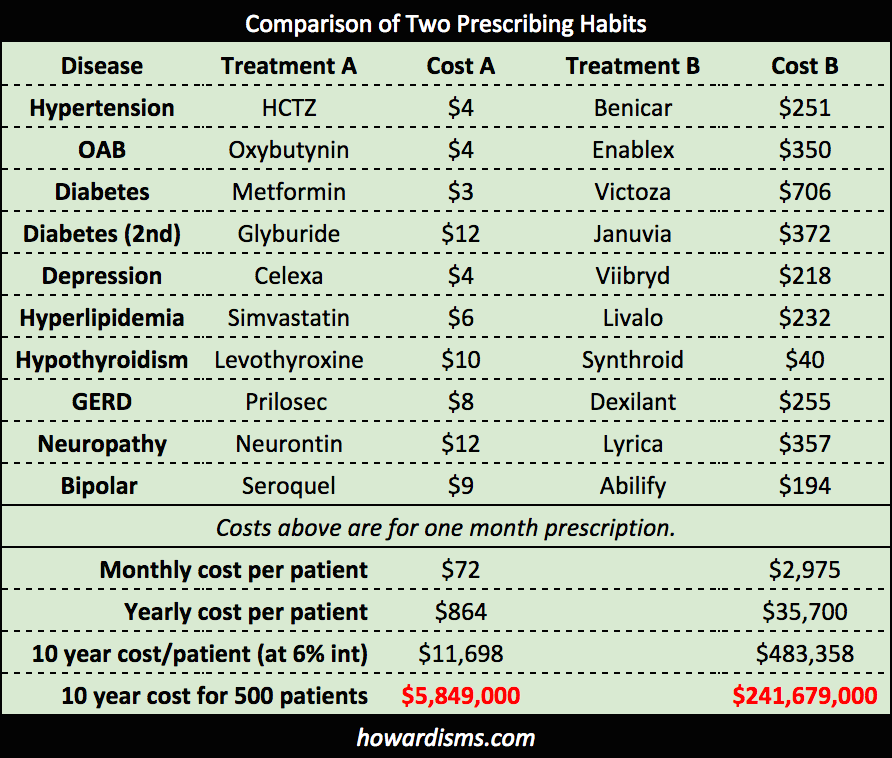 The difference in the two approaches is dramatic: Doctor B has spent nearly a 1/4 billion dollars more than Doctor A in just 10 years on just 500 patients. Add to this the increased costs of poorly selected short-term medications (like choosing Fondaparinux at $586/day versus Lovenox at $9.25/day, or choosing Benicar at $251/day rather than Cozaar at $8/day), unnecessarily prescribed medications (like antibiotics for earaches, sore throats, and sinus infections), unnecessary tests (like CT scans for headaches or imaging for low back pain), and the cost differences between Doctor A and Doctor B soar, all based upon decisions that the two doctors make in different ways.

In a career, Doctor B may cost the healthcare system easily $1 billion more than Doctor A. The cost of prescription drugs (and more importantly, the way doctors decide to use them) more than explains the run-away costs and low value of US healthcare. The top 100 brand-name prescription drugs in the US (by dollar amounts) netted $194 billion in sales a year as of 2015 (plus pharmacy mark-ups, etc.). This list of drugs includes Lyrica, Januvia, Dexilant, Benicar, Victoza, Synthroid, and Abilify (all mentioned above) plus Crestor (it recently went generic so I have substituted the similarly priced, non-generic Livalo), Vesicare (similarly priced to the Enablex listed above), and Pristiq (which is actually more expense than the Viibryd I used on the list – Viibryd is one of the top 100 prescribed branded drugs, just not a top 100 money maker). So Doctor B’s choice of drugs is representative for the choices many doctors are making in the US.

So who’s right, Dr. A or Dr. B? Let’s go through a process to determine what drug we should prescribe.

Is a drug treatment necessary?

Just because a patient has a diagnosis doesn’t mean she necessarily needs a drug to match it. Physicians tend to overestimate the benefits of most treatments and do a poor job of conveying the potential benefits (and risks) to patients. Non-medical treatments (like lifestyle changes, counseling, etc.) are undervalued and perceived as less effective or just too much work. Providers often feel like they have to write a prescription or they will have an unsatisfied patient (in other words, they feel that if a patient presents with a complaint, it must be addressed with an intervention rather than just education and reassurance). Even worse, many clinicians believe that if they prescribe a medication during a visit, they can bill for a higher level visit, so they feel financially rewarded for prescribing. For example,

In general, overuse of prescription medications happens for the following reasons:

Once it is decided that a drug is necessary for treatment, the next question is, Which one?

Which drug is appropriate?

In order to determine this, we must first decide what the goal of treatment is in order to select a medication that satisfies that goal. This sounds obvious, but it isn’t always done appropriately. The next part is trickier. In general, we need to select the lowest-cost medication that fulfills this treatment goal. Dr. A has done this in the above example quite well. Dr. B would rationalize his choices by adding that he has also picked either the most effective drug and/or the one with the least side effects. This rationale sounds attractive, and drug companies prey on the desire of physicians to use the best drug with the fewest side effects (and the ego-boosting idea that they are being innovative). But it is the wrong strategy. Here’s why.

This scenario assumes that such dramatic differences between the two drugs even exist. The truth is that this is rarely the case. Such dramatic differences in side effects and efficacy do not exist for the drugs listed in the scenario above. What’s worse, in many cases the more expensive drug is actually inferior. HCTZ has long had superior mortality benefit data compared to ACE-Is and ARBs, but due to clever marketing, has never been utilized as much as it should be. Metformin is simply one of the best (and cheapest) drugs for diabetes, yet no one markets it and there are no samples in the supply closet. Fondaparinux is an important drug for the rare person who has heparin-induced thrombocytopenia (HIT), but the incidence of HIT among users of prophylactic Lovenox is less than 1/1000, hardly justifying the 63-fold increased price of fondaparinux. The clinical differences between Cozaar and Benicar can hardly begin to justify the 31-fold price difference. To decide by policy that every patient with overactive bladder should receive Vesicare ($300), Detrol LA ($320), or Enablex ($350) as a first line drug when most patients are satisfied with Oxybutynin ($4) is the attitude that is bankrupting US healthcare. In some cases, physicians prescribe the exact same drug at a costlier price (e.g. Sarafem for $486 instead of the chemically identical fluoxetine for $6).

A word of caution about interpreting drug comparison trials: drug companies have ten of billions of dollars at stake when marketing new drugs. The trials that are quoted to you are produced and funded by those drug companies. They only publish the studies that show positive results. Drug studies are, by far, the most biased of all publications so be incredibly careful in believing the bottom line from the studies. Here’s a howardism,

If the drug were really that good, it wouldn’t need to be marketed so aggressively.

Even when one drug is substantially better than another, it still may not be appropriate to prescribe it. Many times, the prohibitive cost of the perceived “better” drug prevents patients from actually getting and maintaining use of the drug, leading to significantly poorer outcomes than would have existed with the “inferior” drug. The best drug is the one the patient can afford to take.

Thus, pick the drug that is designed to achieve the desired goal that is least expensive (or at least pick a drug that is available as a generic), then specifically decide why that drug is not an option before picking a more expensive one (e.g. the patient is allergic to the drug, the patient previously failed the drug, etc.). (Wonder how much drugs cost? All the prices here are taken from goodrx.com).

What influences determine the drugs that clinicians prescribe?

There are two facts about drug company marketing. The first is the physicians do not believe that they are influenced by drug company advertisements, representatives, free lunches and dinners, pens, sampling, CME-events, etc. The second is that drug company marketing is the number one influence on clinicians’ prescribing habits. In 2012, US drug companies spent $3 billion marketing to consumers while spending $24 billion marketing directly to doctors. They spend that money because they know it yields returns. Remember that just one Dr. B is worth nearly 1/4 of a billion dollars in a ten year period to pharmaceutical companies. They are more than happy to buy as many meals as it takes. But doesn’t this money support research? It’s true that most drug companies spend billions per year on research and development, but the total R&D expenditures are usually about half of marketing expenses alone, and obviously a fraction of the $350+ billion revenues. But don’t samples help me take care of my poor patients? No. They help influence your prescribing habits and they give you the impression that the drug is a highly desirable miracle that would be wonderful to give away to the needy because it’s just that good. What can help you take care of your patients are $4 generic drugs. Read more about the financials of the industry and the rising costs of drugs here.

These problems would be much worse than they are if insurance companies (“the evil insurance companies”) didn’t have prescribing tiers that force patients to ask their doctors for cheaper alternatives and if they didn’t deny coverage entirely for many brand-name drugs. But it is still an enormous problem, resulting in hundreds of billions of dollars of excess cost to the US healthcare system each year.

Simply by being more like Dr. A and less like Dr. B, physicians could rapidly and dramatically reduce the cost of US healthcare.