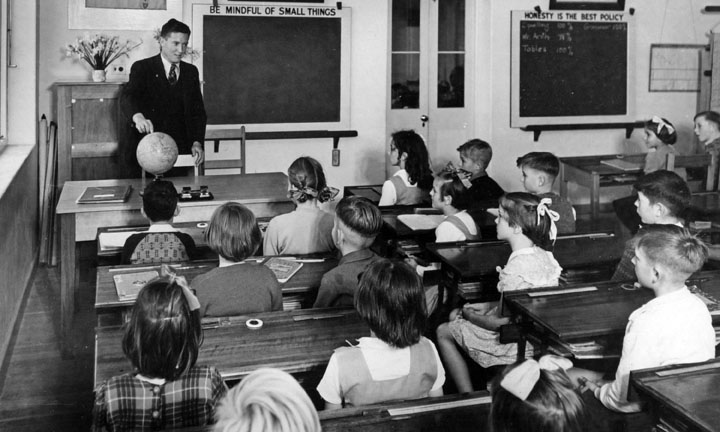 One of the most important experiences in my life occurred when I was a freshman in High School. I was assigned to a rather easy Algebra 1 class. We will call the teacher Mr. Bad. Mr. Bad was late in his career and was uninspired and uninspiring. His pedagogical method of choice was assigning students to read a few pages of the book to themselves and then do the problem set at the end of each section. He offered no teaching or instruction; rather, he would sit with his feet propped up on the desk and read the paper. If a student needed help and was brave enough to go up and ask him, he would offer sarcasm and dullness in return.

My first exam in High School was in this class. It was a set of basic algebra equations of the type 3x+4=19, solve for x. The exam was easy and I finished it quickly. The next day I returned to receive my grade: a solid 50! No problems were marked incorrect; I thought there must be some error or a grading scale with which I was unfamiliar. When I asked Mr. Bad about my grade, he told me that I did indeed get every question correct but since I failed to show my work, I only got half-credit. Nowhere on the exam was there an indication to ‘show our work’ and since he had not actually demonstrated problems to us in class, I was unfamiliar with what that even meant (I had not attended middle school and had not even heard the phrase before). I bargained with him and offered alternatives like taking another test but this was of no avail; the 50 would stand and I was interrupting his paper-reading time.

I went to the Principal. This was the first time I met our Principal and he was a good man with whom I later became friends; but on this day, he laughed at my problem, and dismissed it by informing me that Mr. Bad had tenure and that type of issue was typical for Mr. Bad; but at his age, and with his tenure, his rules were final and there was nothing that the Principal could do about it. I’ll write about the negative effects of tenure on education later, but I remember being struck by the injustice of a system that would so severely handicap a student just out of the gates. What lesson was I to learn from Mr. Bad? That the system is stacked against success? I made high enough grades on the remainder of Mr. Bad’s tests to earn an A and then I transferred out of his class to another Algebra 1 class.

My next teacher was Mr. Great. After just over a week in his class, he asked to see me after class one day. Unlike Mr. Bad, Mr. Great taught in class every day, demonstrating examples on the board and asking questions of the students. He actually knew our names. The students in his class were not very engaged, at least initially. Most days I felt like I was the only student who even cared to be in the class. Students would not answer questions that Mr. Great would ask and more often than not I would end up answering the questions in the midst of the silence. The class became a conversation between me and him.

When I stayed after, he told me that it was not helpful to the other students when I answered the questions. He said that he was trying to pull the others in and that he felt he could in time, but that I couldn’t be their reason for not answering. He told me that the class usually did not finish the last 12 chapters or so of the textbook, but that he felt I had the potential to do so and that he would be cheating me out of the opportunity if he let things stand. He asked me if I were willing to sit at the back of the class and work through the book at my own pace, hopefully completing it. I could just turn in answer sets to him and when I was done, whenever that might be, I would no longer have to attend his class. In return, he would go and ahead and award me an A. I agreed and finished the book a few weeks later.

Mr. Great wanted the best for all of his students and realized that a single approach for everyone wouldn’t work. He wanted me to reach my full potential; his approach and encouragement spring-boarded me to taking Honors Algebra 2 and Honors Geometry the next year, and Precalculus and Calculus after that, earning A’s in all of them and graduating as Valedictorian. But Mr. Great also pushed the other students in the class to do as best as they could too; and I have no doubt that he changed many of their lives as well.

Mr. Bad couldn’t have cared less about his students. No one (the administration) had any expectations of him and he had no expectations of his students. His tenure protected him from student and parent complaints. He was bitter. He thought that his classes were filled with doldrums who couldn’t be improved even if he tried; so he didn’t try. He didn’t see the potential in his students. He was pessimistic. He longed for the good-ole-days, the by-gone days of his youth when he thought his generation was the smartest and best ever.

The juxtaposition of Mr. Great and Mr. Bad taught me more about teaching than any other single experience in my life. The reality is that Mr. Great did very little in actual “teaching” with me; but, he believed in me and inspired me to teach myself. He believed in my potential. Mr. Bad probably never knew my name.

The course was the same but the approach and outcomes couldn’t be more different. I am reminded of the famous quote that has been falsely attributed to the Irish poet William Butler Yeats:

Education is not filling a bucket but lighting a fire.

Apparently, Yeats never said such a thing. But Plutarch did and said it better:

For the mind does not require filling like a bottle, but rather, like wood, it only requires kindling to create in it an impulse to think independently and an ardent desire for the truth.

That should be the goal of a great teacher.

Mr. Great and Mr. Bad are real people, but they also represent archetypes of teachers seen in any discipline. These same characteristics are seen in physicians who teach; indeed, some of the characteristics are greatly magnified because physicians are a unique group of personalities filled with extremes of narcissism, over-confidence, competitiveness, and god-complexes. These are the worst traits a teacher can possess.

Great teachers embrace change and uncertainty and realize that many of the things they have taught and believed will soon be surpassed by newer and better knowledge and data. Bad teachers believe that their own unique experiences in life have prepared them alone to be the quintessential and highest form of master that the discipline can offer; they believe that their own mistakes and successes have put them in a unique position to be supremely wise.

Great teachers believe that when they’re done with their students, the students will have achieved the same level of mastery at a younger age; a level of mastery that has taken the teacher an entire lifetime to attain. This accomplishment guarantees continued growth and success of the student and development of the discipline. Bad teachers believe that the students will always be inferior to them and they belong to the generation that has “arrived.”

Great teachers inspire and motivate students to teach themselves and to become lovers of learning and lovers of knowledge. Bad teachers bore students with anecdotes about how great they think they are and tales of how good things used to be before the current generation ruined everything.

Of course most teachers are average. We would expect most teachers to land somewhere in the middle of the bell-shaped curve. The average teacher wants well for the student, wants the student to succeed, but doesn’t necessarily believe in his or her own ability to inspire and motivate and teach a student to reach her full potential; that is, to push a student to become the best version of herself. The average teacher believes in his averageness and this permeates how and what he teaches.

Good teachers don’t view their students as inferiors at all. Rather they view them as diamonds waiting to be polished. They are an earlier and better version of the teacher. Each student is like an empty canvas waiting to be painted upon, each with the ability, opportunity, and expectation of greatness. In fact, great teachers view it as their own fault when the student does not succeed. The expectation that the student will surpass the teacher is fundamental to good teaching.

These generalizations are applicable to almost any area where there are generational or hierarchal divides. For example, replace the words ‘teacher’ and ‘student’ in any of the previous statements instead with the words ‘leader’ and ‘subordinate,’ ‘manager’ and ‘employee,’ or ‘coach’ and ‘athlete.’ It is obviously true that not all students, employees, or athletes will obtain greatness or surpass those who came before them. Yet in generational terms, this is a true statement. The current generation of young physicians far surpasses the generation that preceded them just as that generation exceeded the generation that came before it. In fact, in virtually any discipline you can name, from sports to computer science, the greatest practitioners of those disciplines are alive today. Each generation was pushed to further greatness by the great teachers and coaches and mentors of the previous generation. We all stand on the shoulders of giants.

Great teaching requires a certain attitude. Beyond that, there are dozens of ways to actually do the teaching. But without the right attitude, failure is certain. If you are a teacher who doesn’t believe in the greatness of your students, please resign immediately. It will be the greatest lesson you can teach them.