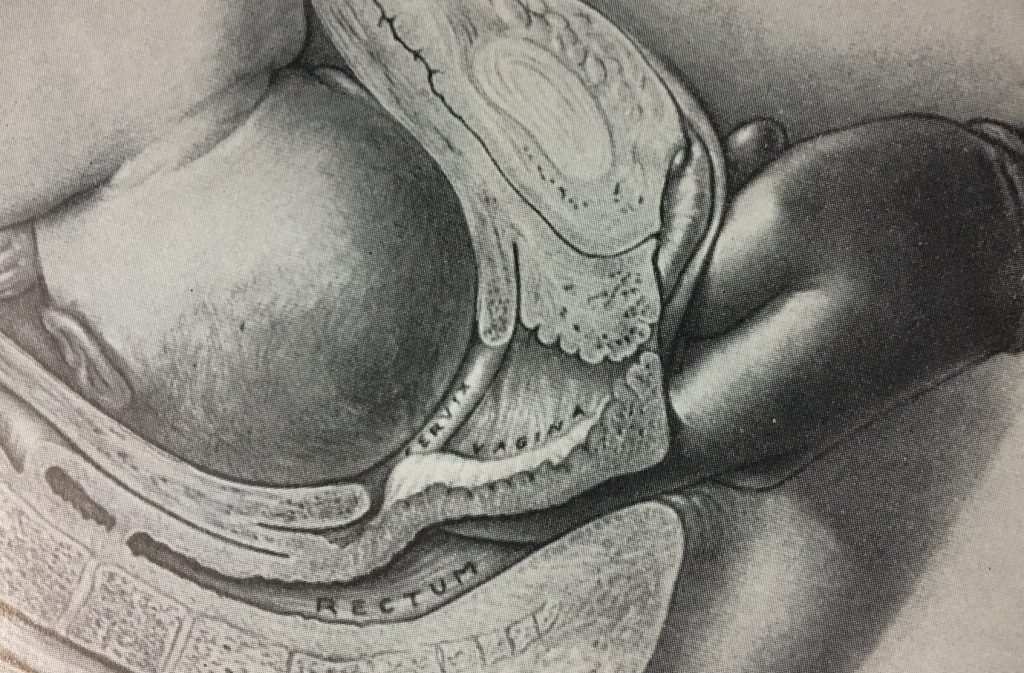 Here are some steps of vaginal delivery that have been used in various combinations over the last century:

All of these practices have three things in common:

Most of these practices were introduced into Obstetrics with the best of intentions, often in response and in reaction to bad outcomes that were being observed. They were interventions that “just made sense,” given how the problems were perceived at the time. They were passed on to trainees with one part dogma and one part fear – fear that doing a delivery any other way would have disastrous consequences. Many of these practices persisted for decades after good evidence said they should be abandoned (and some are still used today).

Let’s look at a few examples.

A hundred years ago or so, before the discovery of antibiotics and after the development of aseptic and antiseptic techniques, obstetricians responded to puerperal fever (the once leading cause of death for pregnant women) by loading up as many aseptic and antiseptic principles as they could onto women having babies. Enemas were to prevent later defecation from spoiling the supposedly sterile field achieved with solutions of mercury and Lysol. Sterile drapes, gloves, and technique were prerequisite. Many of the practices, like shaving the women, actually increased the risk of infection. Women who give birth today rarely undergo any type of preparation at all. Infections still happen and many are unavoidable; when they do occur, they are usually easily treated with antibiotics. But in the belief that all peripartum infections were iatrogenic (and therefore preventable), we even went so far as routinely using only rectal examinations of the cervix (another procedure that likely increased cross-contamination rates). None of these interventions were evidence based except hand-washing and glove wearing.

When fewer and fewer women were dying of infections (yay gloves!), neonatal and infant morbidities and mortality became the next cause célèbre. At the turn of the 20th century, cerebral palsy and other mental and physical disabilities of children were believed to be almost exclusively caused by birth trauma to the brain or other intrauterine events. This trauma supposedly occurred as the head was repeatedly assaulted by the perineum and vagina while the mother was pushing. So, once again, science came to the rescue in the form of the prophylactic episiotomy (to prevent the head from being bullied and to shorten the second stage of labor) and the prophylactic forceps delivery (with the blades of the forceps pushing out on the walls of the vagina, preserving the fetal head from trauma). Of course, these ideas seem silly today, but good intentions led to generations of children being born this way, all the while causing women and children to have countless severe traumas, perineal lacerations, incontinence, and dyspareunia. The widespread introduction of electronic fetal monitoring a generation later, without any evidence of its efficacy, was the next big push to end cerebral palsy. It did not; it did, however, hasten an incredible rise in both the cesarean delivery rate and obstetric lawsuits.

The incorrectly named meconium aspiration syndrome (MAS) gave rise to decades of other ineffective and potentially harmful interventions. The belief that aspiration of meconium was mechanically leading to pulmonary hypertension in the newborn led to numerous efforts to prevent this aspiration, including amnioinfusion to dilute the concentration of meconium in the amniotic fluid, deep suctioning at the perineum, and intubation and suctioning of meconium below the cords (first in all babies, then in babies who were depressed, and now, finally in 2016, no babies). All of these practices were, as usual, introduced with no scientific evidence of safety or efficacy; and slowly, as studies were eventually performed that found them ineffective and potentially harmful, they have all been abandoned.

The practice of holding the baby below the level of the placenta and clamping the cord as quickly as possible was originally done because obstetricians realized that not doing so might allow the transfusion of another 100 ml or so of blood into the baby – and who would want that? Of course, over time, the extra 100 ml was understood to not be harmful and perhaps even beneficial (especially in preterm infants), and finally the 7th Edition of the Textbook of Neonatal Resuscitation recommends that all vigorous infants have at least 30-60 seconds of delayed cord clamping, with the baby right up on the mother’s chest! Joseph DeLee would roll over in his grave.

Vaginal birth is finally coming full-circle. Before doctors emerged on the scene, women gave birth in whatever position they wanted to and then they picked their babies up and held them to their chests while the cord slowly stopped pulsating and the placenta delivered. They received fewer, if any, vaginal exams (and when they did, the examiner wasn’t also sticking her hand in other infected women). If they had a small laceration, it wasn’t repaired (a practice currently endorsed by ACOG). When their babies didn’t cry, they warmed them and stimulated them until they (hopefully) started.

Now I am certainly not arguing for a return to the 18th century, where 1 in 8 women died in childbirth and half of all children died by the age of 5. I don’t think in the least that women should be denied the life-saving interventions of modern obstetrics or even just the benefit of a nice epidural. Yet, I can’t help but think that, overall, nature did a pretty good job in designing women to have babies. Birth is a natural process. Our job is to intervene when things go wrong (as they often do), but not try to redesign a natural process. Cesarean delivery is one of the greatest gifts to women and children; but its overuse today is a leading driver of maternal mortality. Too much of a good thing is not a good thing. This cautionary lesson is present in all of the above examples. Wash your hands when you do an exam; don’t use caustic acid to burn off the last remaining epithelial cells from the vagina.

What are the interventions and practices that really make a difference in a routine, normal vaginal delivery? I’m not sure that there are any. I’m just there in case something goes wrong: shoulder dystocia, prolapsed cord, labor dystocia, abruption, fetal distress, neonatal distress, postpartum hemorrhage, amniotic fluid embolism, fever and infections, etc. I have plenty to worry about. But I can worry about those things without reinventing the way women give birth.

Our predecessors were just as sure of the interventions listed above as we are today of the things we do. Which of the practices that we do today will those who come after us look at with equal scorn? I have a few ideas … but I don’t want to bias you.