Until I know this sure uncertainty,
I’ll entertain the offered fallacy. – William Shakespeare, The Comedy of Errors

My four year old daughter asked me to guess which two numbers she was thinking of, and all she would tell me is that the two numbers add up to 10. How do I approach this problem? I guess; but my guess is not entirely uninformed.

First, I would assume that she is talking about integers. I can also assume that she is talking about positive numbers (she probably doesn’t know much about the concept of negative numbers). She is likely thinking of two different numbers (since that’s how a four year old would process the phrase two numbers), and I doubt she would consider zero (nothing) as a number. This leaves just four likely options: 1+9, 2+8, 3+7, and 4+6. Knowing that people tend to think of numbers in the middle of a sequence, I picked 4+6 (and was right).

Am I psychic? No. Lucky? No. I simply bet on the most probable solution. Yet 42.5 and -32.5 as well as pi + 6.8584 could have been the answers. Even among rational numbers, there are an infinite number of solutions. This is how we make any decision. There is a real answer (whatever is in her head) but without her telling me the answer, I need to use all ascertainable data to make my best guess (that is, the most probable solution). When patients present with a problem, there is an actual diagnosis, but they don’t know it, so we must use all ascertainable data to make a best guess (and change that guess to the new most likely solution when we learn new information). 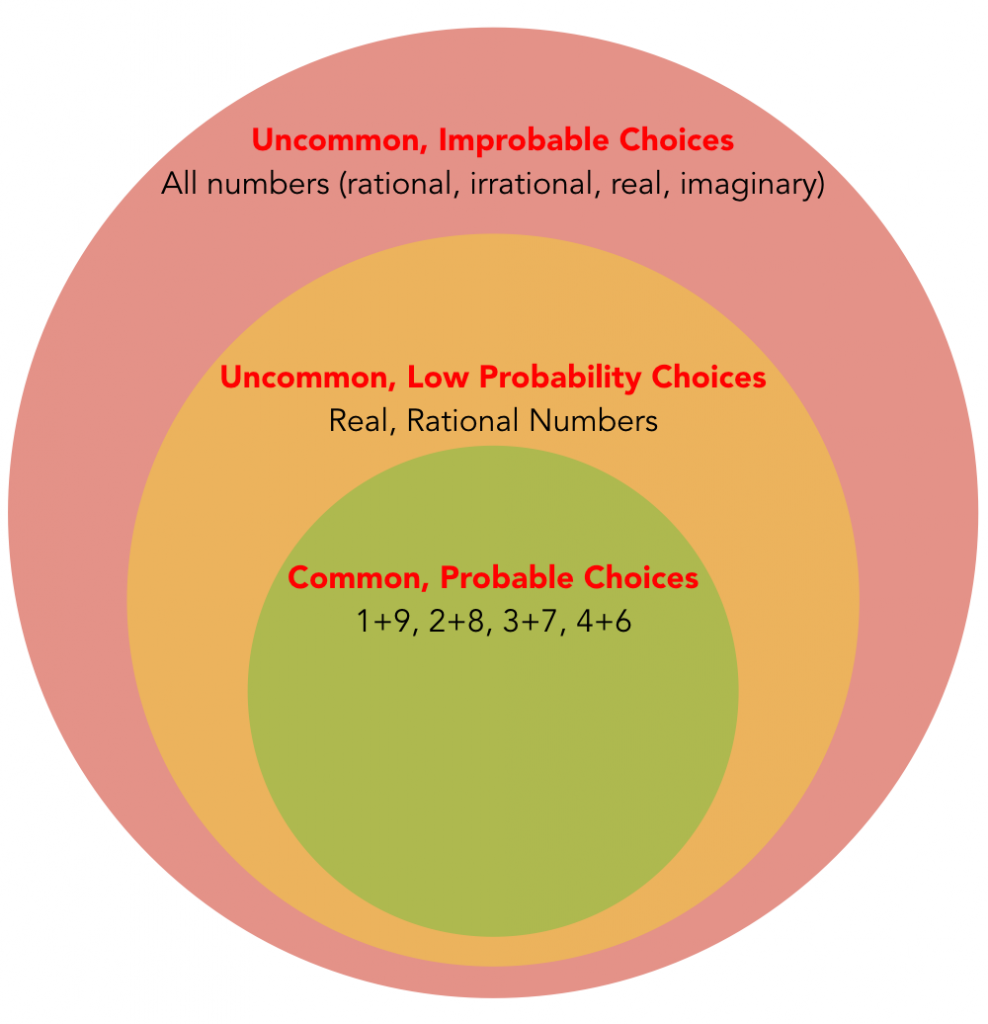 With each additional bit of information I gather, I quickly narrow down an infinite list. If I can get answers to those four questions (don’t assume we can always get answers), I have narrowed down an infinite number of choices to just two. There is also a possibility that I cannot get certain answers to each question; and this is more the case when dealing with clinical medicine. “Does the x-ray show a pneumonia?” The true answer might be, “There is an 80% chance that the x-ray shows a pneumonia.” Nevertheless, I can still use this information to make one diagnosis more likely (pneumonia) and another less likely (lung cancer).

A test is just another type of question. I can ask my daughter if she is talking about two different numbers; she may not know the answer. I could also perform an experiment. For example, I could have her subtract one number from another and tell me whether the answer is equal to zero. In this same way, I order tests in clinical medicine. A CBC or a CT scan is just another form of interrogation.

In clinical medicine, I like to talk about diagnoses in the same three tier system. I call them horses, zebras, and Tasmanian Tigers. When you hear hoofbeats, think horses. It is true: Common things are common and rare things are rare. Our knowledge of what is common (the accessibility bias) saves us time and makes us efficient; and we are usually correct because common things explain most things. But sometimes hoofbeats are zebras, and sometimes they are Tasmanian Tigers.

Tasmanian tigers officially went extinct in 1936. They were a marsupial that was hunted to extinction in parts of Australia, New Zealand, and Tasmania by farmers and others. Yet, every now and again, someone spots an animal in the wild they believe is a Tasmanian tiger. I have seen zebras and I know where to go find them; but I have never seen a Tasmanian tiger and, as far as I know, I never will. Still, I wouldn’t be shocked if someday another one is spotted deep in the wild bushlands of Australia. 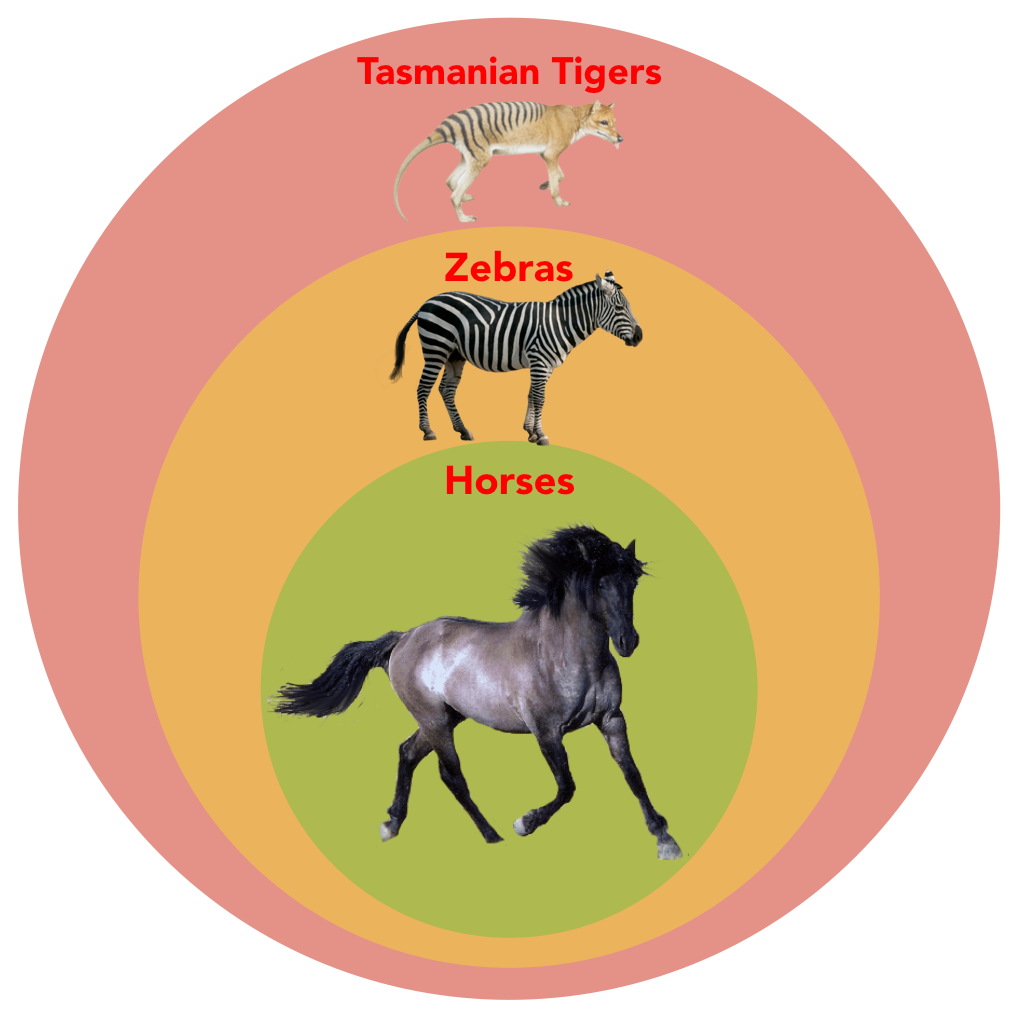 The sum of Tasmanian tigers + zebras + horses is equal to all possible diagnoses. Most of those don’t interest me; but as long as something is possible, it is still on the list. We spend most of our time in the green space of horses, and occasionally we venture off into the goldenrod pasture of zebras. Let’s look at a practical example. Let’s consider a few choices for postmenopausal bleeding. 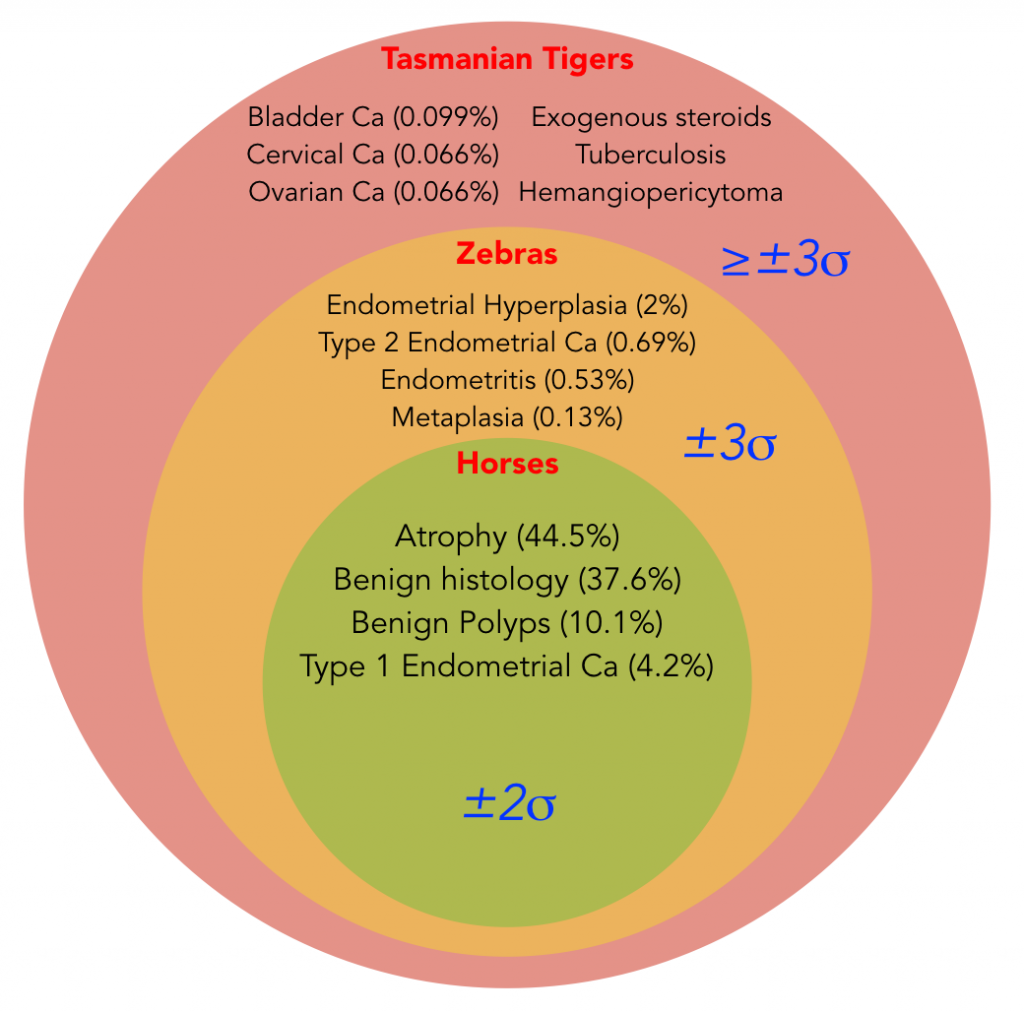 I have arbitrarily (and not accurately) divided this differential diagnosis into three groups based on standard deviations (yes, I know the math isn’t perfect). But the general idea is that about 95% of diagnoses are horses, while about 99.7% of all diagnoses are either horses or zebras. That last 0.3% has a ton of stuff in it, not just the ones I have listed: primary lymphoma of the vagina, hypernephroma, ligneous cervicitis, tamoxifen-affected villous papyraceous, vaginal neurofibromatosis, uterine angiolipoleiomyoma, etc. It even contains so-far undiscovered diagnoses.

We spend most of our lives with horses, and occasionally meet zebras. The next patient you see with postmenopausal bleeding, you could just tell her not to worry about it and that it is benign and you would be correct 95% of the time. But some zebras and even Tasmanian tigers are always important to consider (like endometrial, cervical, ovarian, and bladder cancers) . So how can we put all this together in a cogent approach to diagnosis?

That’s it. It works. Try it out. We are always giving patients our best guesses; we need to remember that they are all guesses and as such should be subject to revision as new information comes in. That’s what Bayesian updating is, and the process I have described here is Bayesian probabilistic reasoning. It allows me to give the most accurate answer I can to a variety of questions, ranging from my daughter asking me to guess two numbers to a patient asking me to find out why she has postmenopausal bleeding.