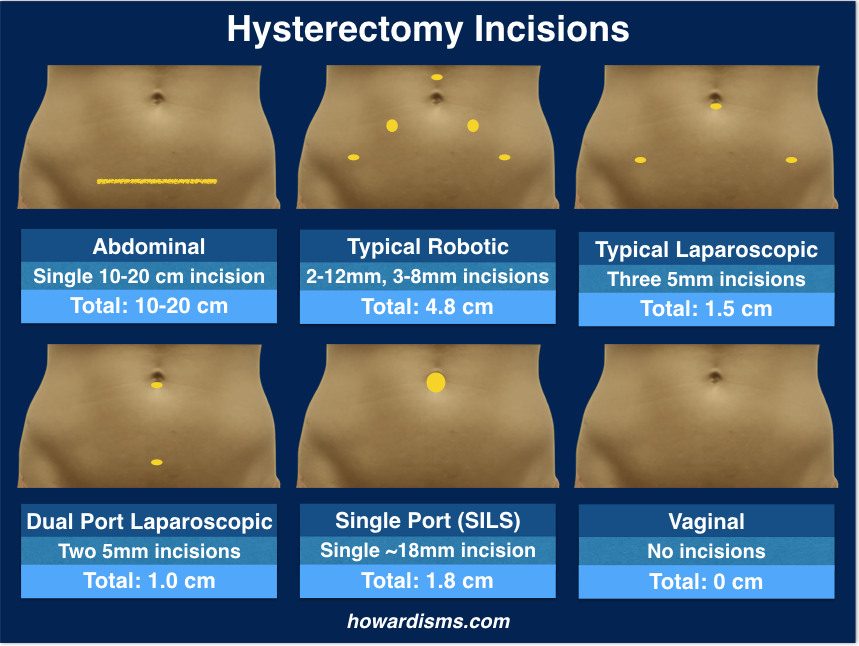 Despite these clear and undisputed facts, vaginal hysterectomy appears to be on the decline. Dr. Thomas Julian has written a wonderful and prescient commentary (in 2008) about this paradox, entitled Vaginal Hysterectomy: An Apparent Exception to Evidence-Based Decision Making. He discusses some of the reasons for its decline, include clever marketing, the myth that “newer” equals “better,” and, mostly, a lack of training for current residents and post-graduates, who more and more feel uncomfortable performing what I (and I suspect Dr. Julian) consider to be the easiest method of hysterectomy. Consider these facts:

So when will the decline in vaginal hysterectomy end? What can be done to reverse the trend? Why don’t doctors believe in evidence-based medicine? All of these are excellent questions. I suspect that the trend will not reverse itself until payers start insisting that less expensive hysterectomies be done whenever possible. I believe that teaching residents (and post-graduates) a simplified approach to vaginal hysterectomy, so that they are more comfortable with the procedure, can aid in increased utilization. And, yes, doctors do not believe in evidence-based medicine; even many of those who claim to actually do not. C’est la vie.

Here is my simplified approach to TVH:

Here are two videos showing the technique. This first video (7 minutes) highlights the major parts of the technique with an emphasis on how to use the Ligasure safely. The concern for thermal injury has prevented many physicians from incorporating energy sealing devices into vaginal surgery, but patient outcomes have been consistently demonstrated to be equal or better when an energy sealing device is used. This video demonstrates the parts of the technique which maximize thermal safety:

The second video is the full length video (23 minutes) of the same surgery with step by step explanations and details of each step:

Ultimately, there is no right or wrong way to do a vaginal hysterectomy. However, if you cannot do the following, then you should consider converting to a different route:

The rest is creativity.

There are some things which have been traditionally taught that serve to make the case unnecessarily difficult. For example,

There are few real contraindications to a vaginal approach. Still, there are some things that make a vaginal hysterectomy more difficult. Victor Bonney said in 1918,

The more one performs vaginal hysterectomy, the less contraindications one encounters.

There is no absolute contraindication to vaginal hysterectomy. (Il n’y a aucune contre-indication formelle a l’hystérectomie vaginale.)

Still, there are impediments, whether real or psychological. Here are some:

Here are some tip and tricks for each of these impediments:

Nulliparity and Lack of Descent

Varma et al. in 2001 did a prospective study of patients without prolapse who underwent hysterectomy for benign conditions. There were 97 abdominal and 175 vaginal procedures, with no significant differences in patient characteristics. The frequency of complications was low and similar in both groups.

Tips for nulliparity or lack of descent.

Sheth et al. in 1995 performed a retrospective review comparing the vaginal hysterectomy outcomes of 220 women with prior cesarean deliveries (one or more) to 200 patients with no previous pelvic surgery. Only 3 of the 220 patients had inadvertent urological trauma intraoperatively. Factors favoring a successful vaginal approach were: only one previous cesarean, a freely mobile uterus, previous vaginal delivery, uterus not exceeding 10-12 weeks size, and absence of adnexal pathology. Infection following the previous cesarean was an unfavorable prognostic factor due to an increased risk of dense adhesions between the bladder and cervix. The authors concluded, “The vaginal route is the route of choice for performing a hysterectomy in patients with previous cesarean section.” I usually feel much more confident dissecting scarred bladders off of uteruses vaginally than abdominally.

Tips for the difficult anterior colpotomy.

Sizzi et al. in 2004 performed a prospective study that evaluated vaginal hysterectomy outcomes in 204 consecutive women with a myomatous uterus weighing between 280 to 2000 g. Vaginal morcellation was performed in all cases. No patient had uterovaginal prolapse. Four patients underwent conversion to a laparoscopic procedure for the completion of the hysterectomy (two of these ultimately required laparotomy). Adnexectomy was successfully performed vaginally in 91% of patients in whom it was indicated. The authors concluded that traditional uterine weight criteria for exclusion of the vaginal approach may not be valid.

Expert vaginal surgeons are quite comfortable in removing larger uteruses vaginally. There is an informal “kilo club” of vaginal hysterectomists who have removed uteruses weighing more than a kilogram (no longer an uncommon feat) and I have even heard of a “two kilo club,” but have yet to join it. The key is morcellation. Taylor et al. in 2003 showed that vaginal hysterectomy with morcellation provided better outcomes for uteruses up to 1 kilo than did abdominal hysterectomy. There are several methods for morcellation:

A truly obliterated posterior cul-de-sac is rare and is most often associated with stage 4 endometriosis or prior pelvic infections. Difficult posterior colpotomies in the absence of adhesions are rare and usually the result of dissection in the wrong plane (usually too close to the cervix). Most patients who undergo hysterectomy for chronic pelvic pain or advanced endometriosis have had prior diagnostic laparoscopies so that an obliterated cul-de-sac is hopefully not a surprise. Another strategy for preoperative detection of an obliterated cul-de-sac is a vaginal ultrasound, applying the visceral slide adhesion imaging technique to the cul-de-sac. I have found this almost universally feasible. A thorough preoperative exam is very helpful as well, either in the office or under anesthesia.

If the posterior cul-de-sac is obliterated, then consider:

If the cul-de-sac is not obliterated, but posterior colpotomy is difficult, then consider:

Multiple studies show a > 95% success rate in vaginally removing ovaries (or fallopian tubes alone). Davies et al. in 2003 were successful in 97.5% of cases. Need for concomitant oophorectomy should be rare, if evidence-based decisions are made. Prophylactic salpingectomy is controversial at best, but virtually all tubes can be removed vaginally if desired (it is easier to remove a tube than an ovary).

Isik-Akbay et al. in a 2004 study concluded that vaginal hysterectomy was the superior and preferred approach for obese women, with a lower incidence of postoperative fever, ileus, urinary tract infection and shorter operative time and hospital stay. Exposure of the operative field can be difficult in obese women, regardless if an abdominal or vaginal route is taken. I, for one, would much rather “struggle” at a vaginal hysterectomy of a morbidly obese woman than struggle with exposure at an abdominal hysterectomy in the same patient. Laparoscopic hysterectomy with obese women is often no easier, introducing new challenges like degree of safe Trendelenburg, length of instrumentation, safe ventilation, etc.

Prior abdominal surgeries are an indication for the vaginal route. Avoid the risks of trocar placement in women with prior GI surgeries by using the vagina as an access route to the abdomen. We have already discussed mitigation of anterior bladder adhesions or the obliterated posterior cul-de-sac.

Adhesions of small bowel or omentum are usually easily managed with direct dissection after artificial prolapse of the uterus (and more easily handled with a pair of Metzenbaums than with a laparoscope).

The biggest contraindication to vaginal hysterectomy is a lack of experience, confidence, and enthusiasm by the operator. I have listed only a few brief tips and tricks. The truth is, most “difficulties” encountered are made phenomenally easier by using a thermal sealing device, like the Ligasure. This allows the surgeon to much more easily combat a lack of uterine descent and have confidence in the security and hemostasis of the uterine blood supply, greatly expanding the number of cases that are amenable to standard techniques. In the 1970, Robert Kovac showed that over 80% of uteruses could be removed vaginally by gynecologic residents, using the then available standard techniques. Simplified vaginal hysterectomy using Ligasure offers even more promise and easier, safer cases.

There are few other things that we should do around the time of hysterectomy to ensure best outcomes.