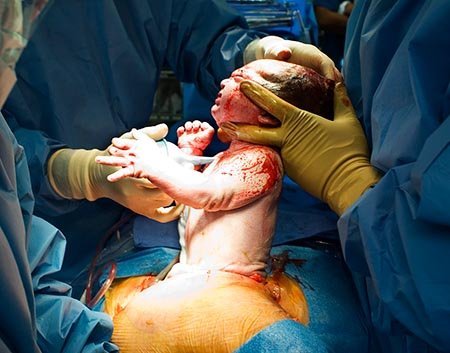 We recently discussed problems with how we communicate risk and benefit of interventions to patients. To communicate successfully, we first have to understand the risks (or benefits) then relate them in an appropriate way to patients. The patients can then make a decision based upon their own values. Unfortunately, doctors are often full of advice about what is “safe,” “healthy,” or “best” for patients, but much of this advice is anecdotal and doesn’t stand up to scrutiny, though it often sounds practical and logical. Here’s a howardism:

Never give a patient health advice that you don’t know to be true.

Providers often repeat back to patients things that they have heard on television (from folks like the widely discredited Dr. Oz), read on the internet, or simply carried with them from their training. Since our preset attitude is to be non-skeptical, this advice is usually passed on if it sounds reasonable without thinking twice. The “better safe than sorry” mindset worsens these fallacies. From this environment comes advice like activity restriction in pregnancy or avoiding sex while pregnant, neither of which have any known benefit. There are many things which are potentially harmful, but both the physician and the patient distort the risk, drawing inappropriate conclusions or making black and white assertions, often confusing relative risk with absolute risk or simply misunderstanding the risks involved.

An example of this is the often asked question, “How many cesareans are too many?” Many patients who have had a primary cesarean but plan large families ask this question after the first or second cesarean delivery. Those are the opportunities to counsel the patient about a TOLAC, though this is not commonly done. Instead, the standard advice is that up to four cesareans is safe, but after that, further pregnancies would be “unsafe.” Many patients planning larger families have had tubal ligations with the third or fourth cesarean based on this recommendation. A simple Google search of maternity message boards shows that this is the common advice given to mothers.

Advice like this comes at a heavy cost: literally women are choosing not to have wanted babies because of fear of the dangers of subsequent cesareans. This type of “no more babies” advice is common, often for maternal medical conditions, maternal age, or previous difficult pregnancies. Yet the appropriate advice is to counsel regarding risks with appropriate, accurate, and comparative data and then let the patient make an informed decision

So what’s the real data? How safe or unsafe are subsequent cesarean deliveries? The following graph shows cesarean complications which occur in more than 1 in 200 pregnancies, with the incidence for the 1st, 2nd, 3rd, 4th, and 5th cesareans. I have excluded some available data about the 6th cesarean because the data pool is very small (and not large enough to compare rare events): 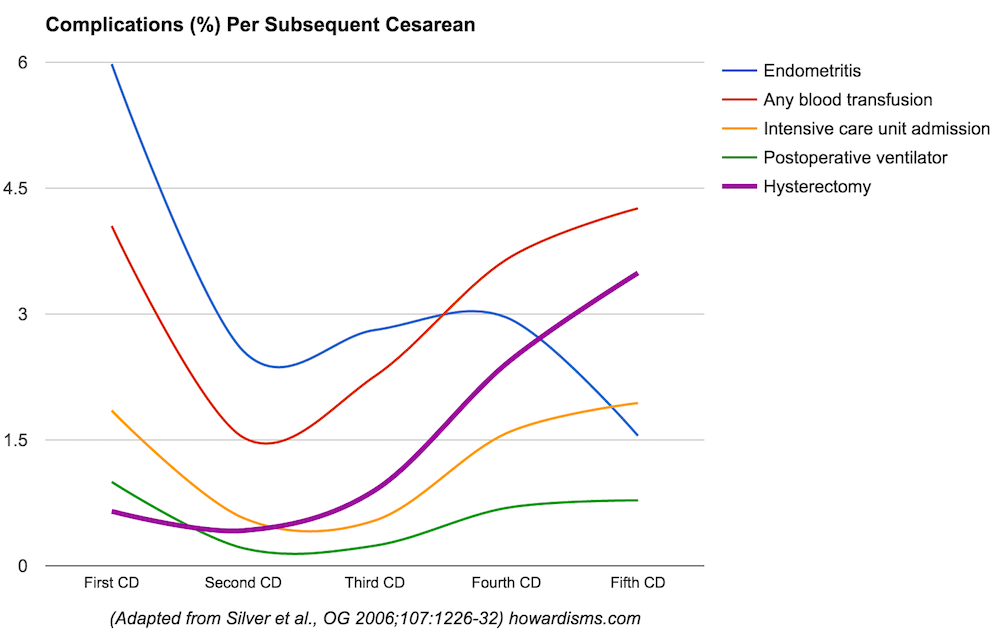 What is immediately noticeable is that the first cesarean is more dangerous than the second. This makes sense, because most first cesareans are unplanned, emergent deliveries occurring after labor has started. Most second cesareans are planned elective repeat deliveries, so we expect to see less endometritis, transfusions, ICU admissions, and ventilator use. What is not necessarily intuitive is that the first cesarean is also more dangerous (or at least as dangerous) as the fifth cesarean! The one common risk that does increase after the second cesarean is the risk of cesarean hysterectomy, rising to almost 3.5% with the fifth cesarean and undoubtedly higher with subsequent deliveries. A similar pattern is seen with rarer complications. The following graph shows those complications which occur in less than 1 in 200 cesarean deliveries: 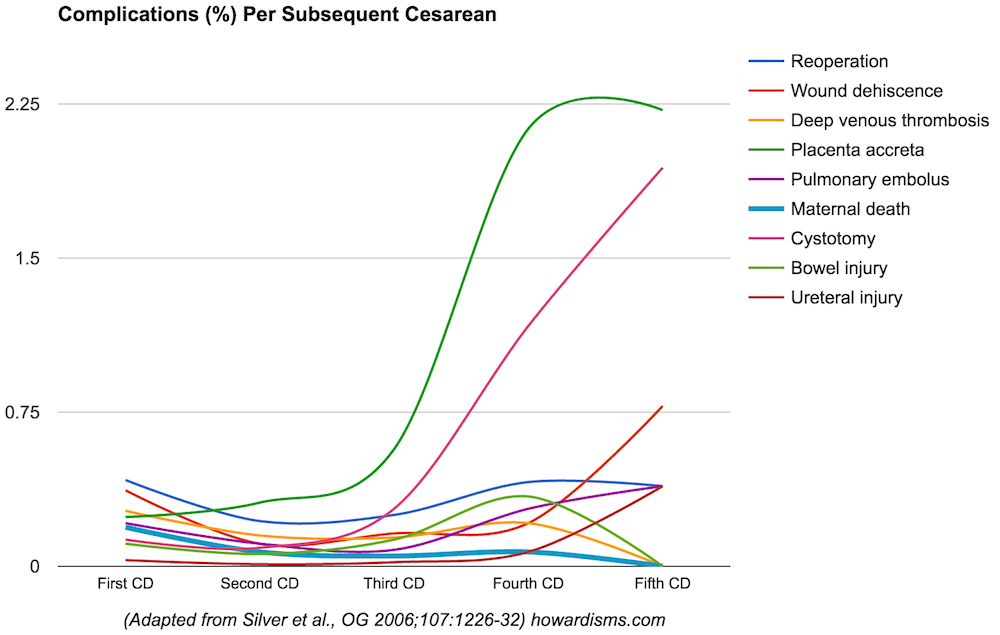 Here again it should be noted that most of these complications are higher with the first cesarean than the second, and the rates of reoperation, DVT, PE, and bowel injury are not appreciably or significantly different. Most importantly, the rate of maternal death, certainly the “boogeyman” complication, actually declines. The highest rate of maternal death is with the first cesarean delivery. Risks that do increase with subsequent cesareans make sense: abnormal placentation (which drives the increased risk of hysterectomy), increased risk of cystotomy (with increasing scar tissue and more abnormal placentation), and increasing risk of wound dehiscence (with multiple laparotomies). Ureteral injury also increases after the fourth cesarean, usually in the context of cesarean-hysterectomy.

Below is the raw data: 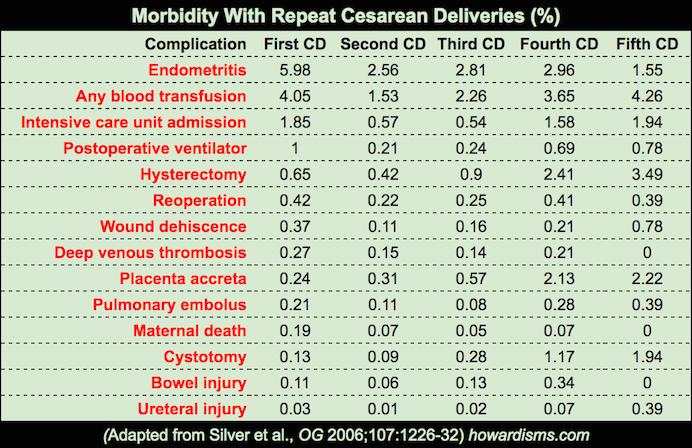 So what does this tell us? The risk that increases with subsequent cesareans is the risk of hysterectomy and associated complications, reaching 3.5% with the fifth cesarean due to abnormal placentation. But despite this, the risk of maternal death and other dreaded complications, like pulmonary embolism, does not appreciably change. In fact, the mother is much more likely to die with the first cesarean that the fourth or fifth. So why would we deny a woman the right to expand her family if she desires? We should not. This is just an example of risk distortion.

Indeed, since the real risks are those of abnormal placentation and hysterectomy, the larger issue is that with each successive cesarean, there is an increased risk that it will be her last pregnancy. Even then, the risk is relatively low. By the fifth cesarean, a woman has an almost 97% chance that she will be able to get pregnant again if she chooses. It is likely that few women, if fully informed, would choose to have a tubal ligation with the fourth cesarean if she desires more children.

Yet physicians perform the first cesareans as nonchalantly as any other thing that they do. It has often struck me as ironic that in residency programs, the resident is often only allowed to perform her first few cesareans if they are primary cesareans, even though this is a far more dangerous cesarean than the second and is often done in the purported context of an “emergency.” It makes much more sense to allow residents to perform their first cesareans in the context of elective repeats. But, once again, cognitive dissonance. This reinforces, though, to the young, learning physician that the first cesarean is the easiest and safest (since she’s allowed to to do it). It, unfortunately, also has the intern eager for a woman’s labor to fail so that she gets a chance to perform a cesarean. Is it any wonder that the primary cesarean rate has increased to 31% among primiparous women in the United States? The future will be filled with cesarean hysterectomies.